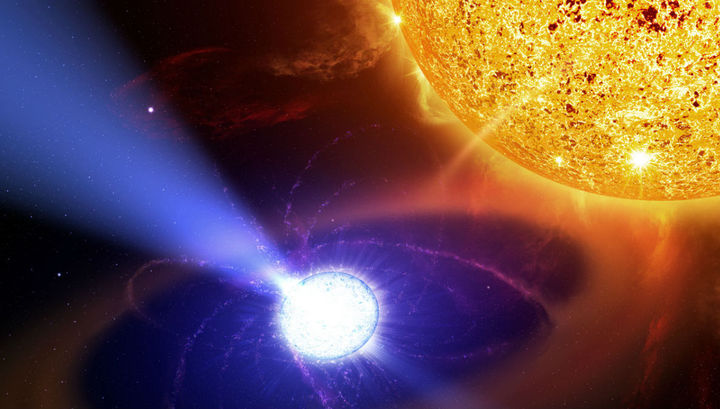 Scientists have proposed a way to find out whether there are forces that do not manifest themselves in the interaction of ordinary matter and “float” only when it comes to the dark. This is an additional attraction or repulsion, which is added to gravity.

The team led by Lijing Shao from the Max Planck Institute for Radioastronomy suggests studying for this purpose the orbits of binary systems with pulsars. The method and the first results of observations are described in a scientific article published in the journal Physical Review Letters.

Recall that, as far as we know, there are only four fundamental interactions, to which the entire variety of forces acting in nature is reduced. This is a strong, weak, electromagnetic and gravitational interaction.

The first two manifest only at distances smaller than the diameter of the atomic nucleus. Electromagnetic forces act between charged particles. They generate such seemingly different phenomena as, for example, the attraction of iron to a magnet, the elasticity of solids and the force of friction. However, such forces do not affect the movement of astronomical objects, such as planets, stars or galaxies. Therefore, the only force that should be taken into account by an astronomer who calculates the motion of celestial bodies is gravity.

Such results were obtained by studying all particles discovered by mankind. However, most experts are sure that there is also a dark matter consisting of particles unknown to science, and it accounts for 80% of the mass of matter in the universe. “Vesti.Nauka” (nauka.vesti.ru) in detail told about what made scientists come to such extravagant conclusions.

What if the dark matter acts on the trajectory of celestial bodies not only through gravity, but also through an unknown fifth force? This possibility can not be ruled out when it comes to hypothetical particles with unknown properties.

Check this tempting version as follows. The best-tested gravity model to date is the general theory of relativity (GTR). It gives detailed forecasts of the trajectories of celestial bodies. It is necessary to arrange a test of one of its basic predictions in two situations: when the influence of dark matter can obviously be neglected and when it is significant. If the results coincide, we can say that in both cases only gravity, described by GRT, is involved. If the second case differs from the first one, it can be understood that, from the side of dark matter, not only gravitation acts on celestial bodies, but also some additional force of attraction or repulsion.

This principle is well suited to the principle established by Galileo and later confirmed in general relativity: in a given gravitational field, the acceleration of free fall is the same for all bodies, regardless of their mass, composition and internal structure. This means that the inertial mass (which determines which force should be applied to the body to give it the given acceleration) is equal to the gravitational mass (which creates the force of gravity). The last assertion is known as the weak equivalence principle.

In 2017, it was verified with the help of an artificial Earth satellite with an error of not more than one trillionth of a percent. In this case, according to most experts, the influence of dark matter could be neglected, since the distance from the Earth to the satellite is astronomical in scale, and there is little dark matter between them.

The influence of the mysterious substance could be detected by studying the orbit of the moon. But here the weak equivalence principle is verified “only” to within a thousandths of a percent, and then only thanks to the mirrors installed on the Selena surface. The laser beam detached by them makes it possible to determine the distance between the Earth and the Moon with an error of less than a centimeter. 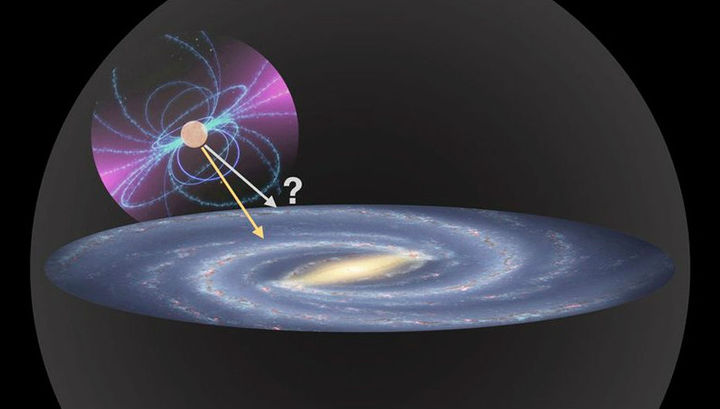 A new test proposed by the Shao group is related to the study of the orbit of a binary system, one of whose components is a pulsar. Until now, no one has used neutron stars to find the fifth force on the part of dark matter.

“There are two reasons why double pulsars open up a whole new way of testing such a fifth force between ordinary matter and dark matter,” Shao said in a research release. “First, the neutron star consists of a substance that can not be created in the laboratory, many times more dense than the atomic nucleus and consisting almost entirely of neutrons.In addition, the huge gravitational fields inside the neutron star are a billion times stronger than those of the Sun, in principle, could significantly enhance the interaction of [neutron stars dy] with dark matter. ”

Recall that signals from pulsars come with a strict periodicity, sometimes accurate to nanoseconds. Due to the motion of the neutron star in orbit, the arrival time of the pulses is shifted, which allows us to restore the trajectory parameters. The orbits of the most stable pulsars can be calculated with an error of less than 30 meters.

Particularly suitable in this sense is the neutron star PSR J1713 + 0747, located at a distance of about 3800 light-years from the Z