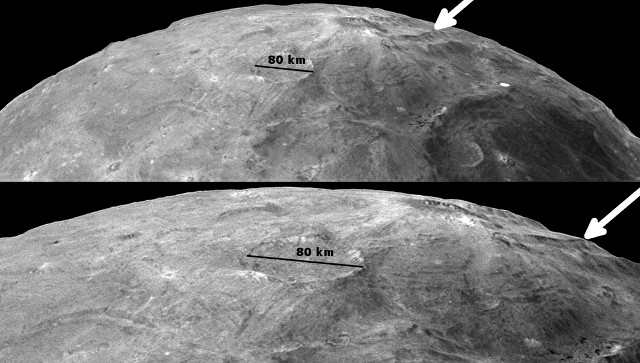 Three-dimensional photos from the probe New Horizons indicate presence of the frozen underground ocean on Charon, the largest satellite of Pluto.

Flight of the probe New Horizons by Pluto and its satellites in July, 2015 showed existence on Charon of the composite and contrast relief. Scientists made out huge “ditches” 4-5 kilometers in depth and potent mountain ridges.

For example, on Charon’s equator there is a whole network of canyons which received the name “Sereniti’s hollow” in honor of the ship from the fantastic movie like. It is the most stretched structure of this sort in Solar system – its length exceeds 1800 kilometers that is almost five times more larger, than at Grand Canyon on Earth. According to the assumption of NASA, these canyons could result from freezing of the subglacial ocean in Charon’s subsoil.

Alan Stern, the mission manager of New Horizons, and his colleague produced the new evidence in favor of this hypothesis, having analysed as far as in general Charon’s surface from the geological point of view is strained. Existence of certain forms of global strength as scientists assumed, had to confirm existence of the subsurface ocean, and, on the contrary, to point their absence that all unusual forms of a relief on Charon arose in other path.

For this purpose the scientific team united pictures from the color New Horizons camera in three-dimensional stereo-images which allowed it to see all roughnesses of a surface, small canyons and hollows, not noticeable in black-and-white pictures from the Ralph camera.

Having analysed pictures of that party of Charon which was turned to the probe during its flight through “suite” of Pluto, scientists found a large number of signs of stretching on the surface of the satellite. The set of small and almost invisible cracks was present at Vulcan’s plain and at Earth Oz, the largest forms of a relief on Charon, and not just at the large canyons and hollows opened in the first days after data acquisition with New Horizons.

Similar ice “extensions”, by estimates of Stern and his colleagues, occupy about 1% of the total area of Charon that is quite enough to speak about presence of rather large subglacial ocean on this moon of Pluto. Judging from the fact that such cracks are present at the most aged plains of Charon, his ocean froze for a long time, several billions years ago therefore diameter of the planet grew by several kilometers.

Conclusions of scientists in general keep within the theory about a “radioactive” origin of a subsurface layer of the water which arose thanks to heat which was generated by disintegration of radioelements in Charon’s core. When stocks of radionuclides were exhausted, Charon’s subsoil cooled down, the ocean froze and tectonic activity forever stopped.