New Horizons is sent to study the asteroid 2014 MU69 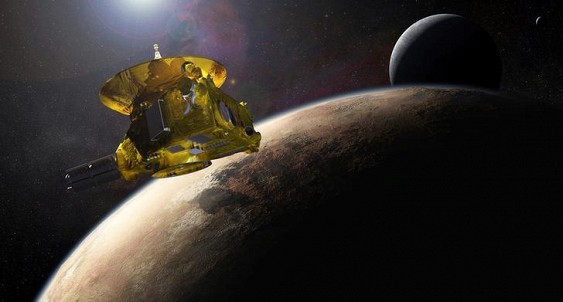 NASA has performed a successful course correction of interplanetary probe New Horizons, which is sent to the asteroid 2014 MU69 in the Kuiper belt.

According to NASA, on Wednesday, the onboard computer of the probe 44 seconds turned it on the motor that adjusted the speed of the machine by 44 centimeters per second. This helped to clarify the course of the probe of the upcoming January 1, 2019 meeting with the 6.4 billion kilometers from Earth asteroid.

The data obtained from the probe, which is currently 5.6 billion kilometers from Earth, confirmed that the operation course correction was successful.

Asteroid 2014 MU69 was opened using orbital telescope Hubble, the discovery was announced in 2014.

New Horizons, which is considered to be the fastest ever launched by earthlings spacecraft, was launched in January 2006. A year later, it passed Jupiter at a record close distance of 2.3 million kilometers, passing the Earth valuable information about the atmosphere and magnetosphere of the planet and its satellites. After that, the unit continued its space journey in hibernation mode to save the features on it equipment. In January 2015, the probe began its journey to Pluto. New Horizons close to the dwarf planet at a distance of only 12.5 thousand kilometers июля2015 14 years.

In July 2016, NASA announced that the New Horizons probe sent to study the asteroid 2014 MU69.