New information about one of the volcanoes of Mars 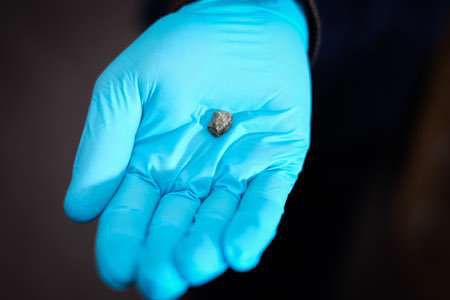 Analysis of the Martian meteorites allowed to obtain new information about one of the volcanoes of the Red Planet – and helped to determine where exactly on the surface of the planet this volcano was.

Geologists from the United Kingdom and the United States, using modern methods of mass spectrometry, have received new information on the origin of six meteorites known as “swords” – pieces of Martian rocks that detached from the surface of the Red Planet as a result of a collision about 11 million years ago, and then drifted in space towards the Earth.

These findings show that the Mars volcano, which became the source of these meteorites, erupted at least four times for 90 million years.

Martian volcanoes differ from their terrestrial counterparts in that there is no plate tectonics on Mars, and the same volcano can erupt for a long time, while on our planet the shifting lithospheric plates eventually “cut off” the erupting volcano from a deep source magma.

In the new work, a group of researchers led by Dr. Benjamin Cohen first determined how long these nuggets in space had spent, assessing the level of changes caused in their structure by the action of cosmic radiation. Scientists confirmed that the stones spent 11 million years in space. The second stage of the study was to determine the age of these samples of the Martian rock of volcanic origin using radioisotope analysis (argon-argon method). Cohen’s team found out that the nakhlites were formed as a result of four volcanic eruptions that took place over 90 million years – an extremely long period of activity for the volcano (terrestrial volcanoes usually remain active for no more than several million years). The final stage of the scientific work of Cohen and his colleagues was the identification of the source of these nahlites on the surface of Mars – and the most suitable place was the nameless crater located on lava-covered plains 900 kilometers from the top of Mount Elisius and 2000 kilometers from the current location of the NASA’s Martian rover Curiosity .