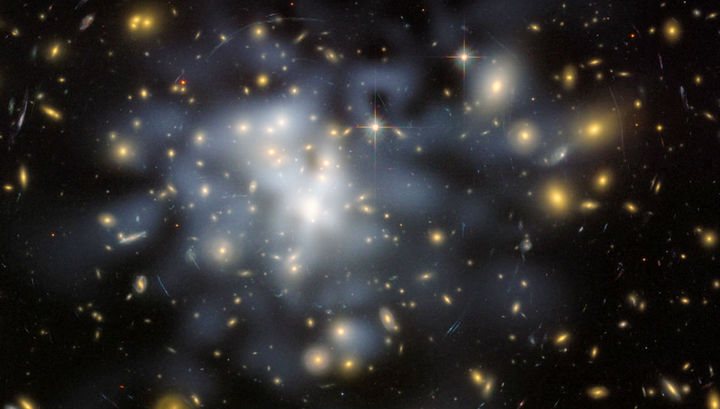 Galaxies, like people, do not like being alone. For example, of the 10,000 closest galaxies, only 5-10% are relatively isolated. Another 10% form pairs. 10-20% of stellar systems are part of the clusters, and all the others form groups containing from three galaxies to several tens. Among them is our Milky Way, which is part of the Local Group.

A system of galaxies is called a cluster, if in it from a few tens to several thousand (sometimes more) of stellar systems. Clusters are combined into superclusters, and they form giant “honeycombs” – the grandiose cellular structure of the Universe, where legions of stellar systems are assembled into “threads” or “walls” bordering voids – voids.

When the substance is collected in such quantity, it dances to the tune of gravity. The distribution of gravitating masses is what determines the shape of galaxy clusters and the motion inside it. But, as already known for several decades, not only the substance visible in telescopes of any kind of range is being gravitated. A huge part of the mass of galactic clusters is accounted for by dark matter.

What is she? No one knows. This mysterious substance does not interact with electromagnetic radiation, at least strongly enough that we notice it. Therefore, it is studied from the only observable manifestation-the gravitational effect on the visible substance. This property allows astrophysicists to create detailed maps of its distribution over the universe.

Mainstream theories suggest that dark matter consists of particles that move slowly compared to the speed of light and interact with each other only through gravity. This model successfully explains the very “honeycombs” – the largest structure in the visible universe. Of these properties of dark matter, there are several more conclusions that the observer can verify (verifiable forecasts are a key feature of the scientific theory that distinguishes it from philosophical words).

For example, astronomers have long known that near the center of a large cluster of thousands of galaxies, there is usually a very massive and bright star system. It is called the brightest galaxy of the cluster (the Latin abbreviation BCG). The most popular model of dark matter “reports” that this galaxy solemnly sits exactly in the center of mass of the cluster. However, the latest observational data makes us doubt this. 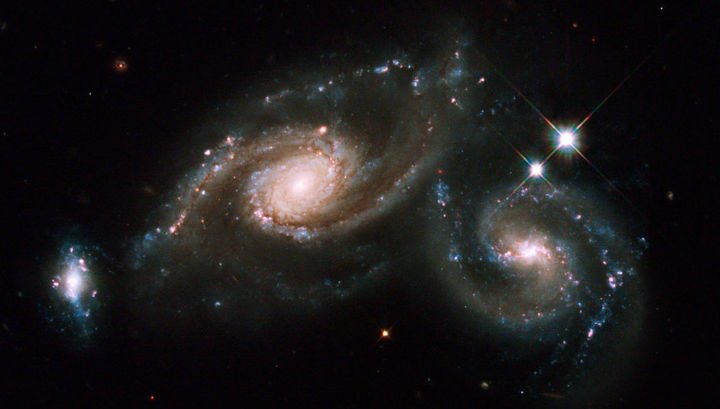 A team of Swiss, French and British astronomers led by David Harvey observed ten clusters of galaxies with the help of the good old Hubble. Scientists used the effect of gravitational lensing to estimate the mass distribution of the cluster. This remarkable phenomenon is predicted by Einstein’s general theory of relativity. It consists in the fact that strong gravity warps the path of light rays, that is, massive objects work like lenses. Observing the images that are obtained in this way, it is possible to reconstruct the distribution of the force of gravity and, consequently, the mass.

The results of the analysis surprised scientists a lot. It turned out that BCG does not necessarily lie at the center of mass of the cluster. For the sample studied, the scatter averaged about forty thousand light-years.

The authors note that something similar was predicted by exotic dark matter models, in which its particles interact with each other not only with the help of gravity. However, they do not exclude that the matter may not be in the properties of this mysterious entity, but in some astrophysical process that is still unknown to science.

The researchers put great hopes on the future space mission “Euclid” (Euclid). This device, specially designed for studying dark matter, is scheduled to be launched in 2020. Probably, he will answer many questions.