New observations strengthened the mystery of the “star of Tabbi” 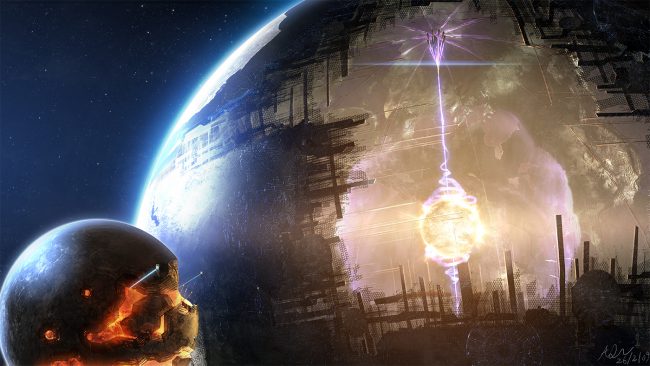 Scientists have proposed another prosaic explanation of the mysterious “star of Tabbi,” which has been bothering astronomers for quite some time with their strange behavior. The mysterious prolonged obscuration of the star Tabbi, also known under the pseudonyms of Boyajyan star and KIC 8462852, is most likely caused by dust, rather than by a giant network of solar cells or other “mega-structures” constructed by advanced aliens, the new study says.

Astronomers came to this conclusion, noticing that the blackout was more pronounced in the ultraviolet than in infrared light. Any object more dust particles would lead to uniform darkening at all wavelengths, scientists say.

“This virtually eliminates the theory with alien megastructures, because they can not explain the wavelength-dependent darkening,” said lead author Juan Meng of the University of Arizona. “Instead, we believe that a dust cloud with an orbital period of about 700 days is moving around the star.”

KIC 8462852, which lies 1,500 light years from the Earth, causes a lot of intrigue and gossip since 2015. That year, a team led by astronomer Tabete Boyadjian (hence the star’s nickname) reported that KIC 8462852 had dramatically dimmed several times in the past half century, once by 22%.

No planet in orbit could cause such a blackout, so scientists began to come up with possible alternative explanations. These include swarms of comets or fragments of comets, interstellar dust and the popular (but unlikely) hypothesis of mega-aliens.

The mystery became only deeper after Boyajyan’s initial research. For example, other research teams found that, in addition to occasional short-term blackouts, the star Tabbi lost approximately 20% of brightness from 1890 to 1989. In addition, the work of 2016 found that the brightness of the star decreased by 3% from 2009 to 2013.

A new study, which was published last week in The Astrophysical Journal, is devoted to these long-term events.

From January 2016 to December 2016, Meng and his colleagues (including Boyadjian) studied the star Tabbi in infrared and ultraviolet light using the Spitzer and Swift telescopes. They also observed it in the visible light range using a 27-inch AstroLAB IRIS telescope, a public observatory near the Belgian village of Zillebek.

The observed ultraviolet darkening implies circumstellar dust grains large enough to remain in the orbit of the Tabbi star, despite the radiated pressure, but small enough not to block the light evenly at all wavelengths, scientists say.

Still, the new study does not solve all the mysteries of KIC 8462852. For example, it does not explain the short-term 20 percent obscuration that the Kepler space telescope observed.

And another study – led by Joshua Simon of the Carnegie Institution of Science in Pasadena, California – showed that the star Tabbi has twice become vivid over the past 11 years. They also noted that the star has become dimmer by 1.5% from February 2015 to the present day.

“Prior to this work, we thought that changes in the brightness of the star occurred only in one direction – darkening,” notes Simon. “But the realization that the star sometimes became brighter in addition to the periods of blackout is incommensurable with most of the hypotheses that explain its strange behavior.”

How it was possible to describe distant star brightness variations in the beganing of twenty century, before powerful ground and space telescopes?