New projects of future houses of Mars are presented 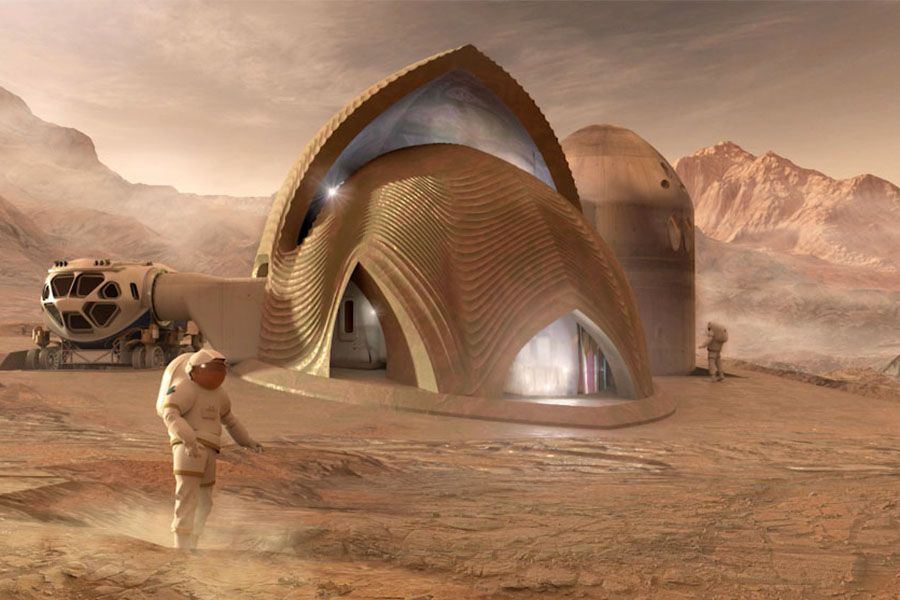 NASA, together with the University of Bradley (USA), selected five finalists of the 3D-Printed Habitat Centennial Challenge competition, which is devoted to the development of dwellings for astronauts on Mars. A financial reward of one hundred thousand dollars is distributed among the five teams that will have to build experimental models of their projects. The scale of the models is one to three.

This is the third phase of the competition, so the participants were presented with strict requirements. Habitats should have an area of ​​three hundred square meters. The living quarters are meant for four people who could spend a year in them. Infrastructure and materials from which houses were made were also taken into account.

A team from the state of Arkansas named its project Zopherus. Its main feature is a landing module that builds houses without the participation of a person. First he sends miniature robots to extract resources. Then the module, with the help of installed 3D printers, prints houses and laboratories that are connected with each other by passages and resemble bee honeycombs. The creators say that if desired, such a settlement can be expanded if, for example, the number of inhabitants increases. The award is 20,957 dollars.

Engineers from New York took second place. They came up to the task completely differently. In their opinion, the optimal form of the house, which would leave the minimum amount of unused space, is a cylinder. It consists of two layers and has four floors. On the ground floor there is a garage and the first laboratory, on the second floor there is a second laboratory and a kitchen, on the third – bedrooms, and on the fourth – a recreational room. The award is 20,957 dollars.

The project Kahn-Yates stands out against the background of the others in that the authors have provided a garden, which also covers the protective dome. Construction of the complex takes place in eight stages, and materials for its manufacture, as well as in the first project, are extracted from the surface of the Red Planet. The award is 20 622 dollars.

The owners of the fourth place were inspired by northern architecture and created a structure that would balance between the amount of natural light and protection from radiation. The engineers distributed the rooms so that the place in which the astronauts should spend most of the time protected from radiation is best. The reward is 19 580 dollars.

The Northwestern University project was the weakest. It was brought down by the domed shape of the building, which left a lot of empty, unoccupied space. The authors divided the hemisphere into two parts. In one they arranged a laboratory, a kitchen and sanitary rooms, in the second – bedrooms. The award is 17 881 dollars.