New unique photos of Jupiter from the probe Juno 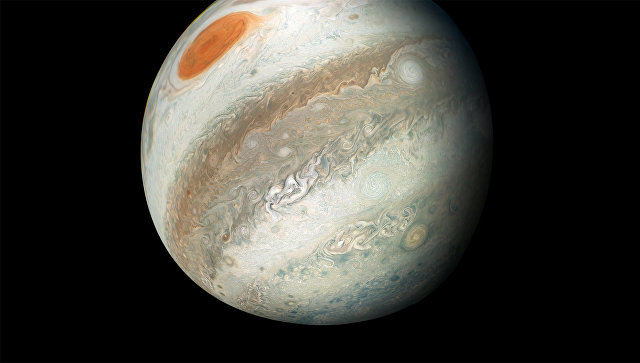 Interplanetary probe Juno transferred to the Earth new images of Jupiter, received from a unique angle in the “natural” color range during the last approach to the giant planet, NASA reports.

The probe Juno, flying to Jupiter for five long years since August 2011, in early July of last year approached the giant planet and entered a stable orbit around it. The first two months after the collision the probe spent on reducing the orbit and checking all scientific instruments, and the first scientific data were received only at the end of August.

The verification of all scientific instruments of Juno and the transition to a new orbit more convenient for observations was to be held in mid-October 2016, but just before the start of this maneuver, NASA recorded engine malfunctions that forced the mission engineers to postpone it to the next rapprochement with Jupiter.

Subsequently, the mission members abandoned such plans for an indefinite time and began to monitor Jupiter from a “high” orbit. Because of such failures, Juno is approaching Jupiter more than once in two weeks, as originally planned by scientists, and every 53 days.

The last approach of Juno to the largest planet of the Solar System, the twelfth in a row, occurred in early April of this year, when the probe once again traveled 17 thousand kilometers from the surface of Jupiter.

When the probe began to move away from the planet, he was able to take a picture of it from a unique angle, looking at it “from below,” which allowed him to “move” the Great red spot, the “eternal” hurricane at the equator of Jupiter, to the upper part of the gas giant. This, as noted in NASA, allows you to compare this storm with other hurricanes, raging at the south pole of the planet, which can be seen at the bottom of the picture.

The next rapprochement between Juno and Jupiter will take place very soon, in just two days. On Thursday, it will once again fly through the upper atmosphere of the planet and receive new data on its structure and chemical composition.