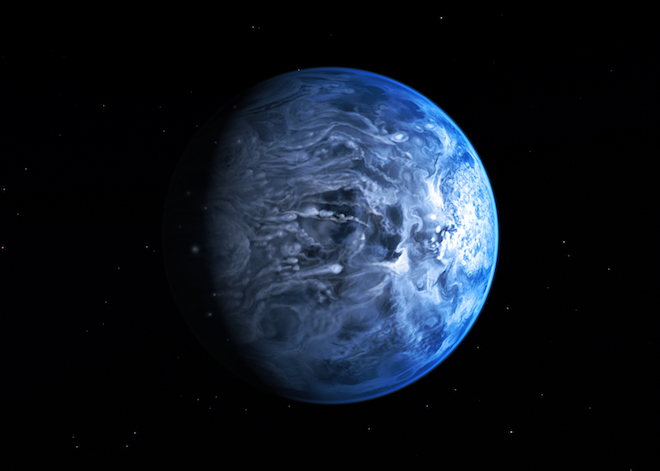 If you complain of gloomy autumn, you don’t know anything about the bad weather. In the image below — the exoplanet HD 189733 b, it would seem like the Earth and distant from us only 63 light-years away. But don’t take bright blue giant in the friendly sky. Weather conditions in this nightmarish world of death.

The alluring blue of the planet are not generated by reflection of a tropical ocean, as on earth, and the glowing mists of the atmosphere containing high clouds laced with silicate particles. As soon as the space traveller, deceived by the appearance of HD 189733 b will reach its shell, it will be spun in a terrible vortex, the winds that blow at a speed of 2 km/s (at 7 times the speed of sound), cut slanting rain of sharp glass drops and toasted unimaginable heat.

The global temperature exceeds 3000 °C is about 60 times hotter earth record and more than half hotter than the Sun. Where does a killer rain? Air HD 189733 b is full of tracery of silica particles. Silicate condenseries in the heat, forming small drops of glass that scatter blue light.

Exoplanet HD 189733b was first discovered by the Hubble telescope in 2013. The object is a gas giant, located very close to its star, which leads to terribly high temperatures. Usually such bodies are called hot Jupiters. To study the weather of the planet, the researchers started last year by measuring the emission of sodium from it.