Now it is possible to explain solar phenomena 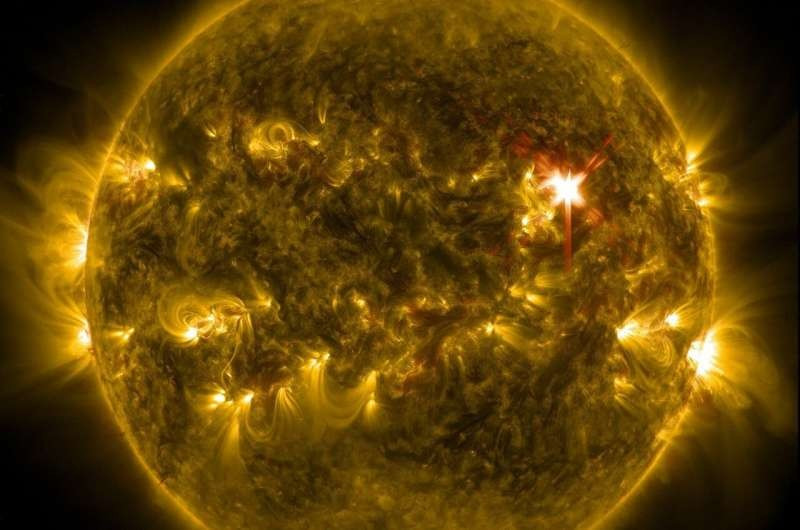 The multi-stage eruption on the Sun has revealed new clues to the long-standing mystery of what causes powerful and unpredictable solar eruptions.

This explosion contained components of three different types of solar eruptions, which usually occur separately, which is why such an event was observed for the first time. Combining all three types of eruptions in one event gives scientists a kind of solar Rosetta stone, allowing them to translate what they know about each type of solar eruption in order to understand the other types and uncover the underlying mechanism that will explain all types of solar eruptions.

“This event was the missing link where you can see all aspects of different types of eruptions in one neat little event,” said Emily Mason, lead author of the new study and solar scientist at NASA’s Goddard Space Flight Center. “This proves that the eruptions are caused by the same mechanism, only on different scales.”

Sun events usually come in one of three forms: coronal mass ejection, jet, or partial eruption. Coronal mass ejections (CMEs) and jets are explosive eruptions that throw energy and particles into space, but look very different. The jets erupt as narrow pillars of solar material, CME emissions form huge bubbles that expand, expel, and are shaped by the Sun’s magnetic fields. On the other hand, partial eruptions begin to erupt from the surface, but do not contain enough energy to leave the Sun, so most of the material falls back onto the Sun’s surface.

In this event, observed on March 12 and 13, 2016 by NASA’s Solar Dynamics Observatory and the European Space Agency and NASA’s SOHO (Solar and Heliospheric Observatory), scientists saw the release of a hot layer of solar material over a magnetoactive region on the Sun’s surface. The throw was too large for the jet, but too narrow for the CME. Within half an hour, a second, cooler layer of material on the surface also began to erupt from the same location, but eventually fell again in a partial eruption. Observing the eruption with both jet and CME characteristics informs scientists that they are caused by an unusual mechanism.

With this new insight, scientists can apply all of their knowledge of jets to the CME. The event also informs scientists that partial eruptions are occurring in the same spectrum, but collide with some as yet unknown limiter that controls their energy and prevents them from leaving the Sun.

Understanding the mechanism behind these events, especially the CME, is critical to predicting when a violent eruption could cause destruction on Earth. CMEs, in particular, release large clouds of high-energy charged particles and magnetic fields that flow through the solar system and can cause a storm of high-energy particles and dangerous activity for astronauts, space technology and utilities on Earth.

By simulating a new eruption of Rosetta and others like it, scientists hope to find out which root mechanism causes solar eruptions and determines their characteristics. Finding the trigger could eventually allow scientists to predict when a violent eruption could threaten Earth and Mars a few hours before the event, giving astronauts and spacecraft operators ample time to take precautions.