Ocean beneath the surface of Enceladus 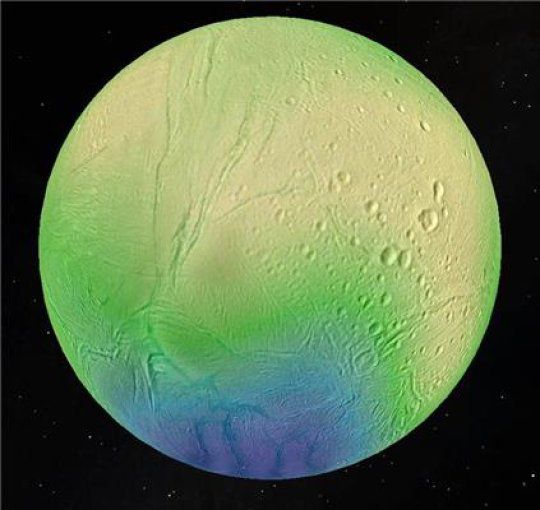 In the new work, a team of researchers led by Ondrej cadecom the Department of Geophysics, Charles University in Prague, Czech Republic, proposed a new model that allows to reconcile contradictory data about the icy moon of Saturn, obtained in different studies.

According to this model the thickness of the ice crust on the surface of Enceladus in the vicinity of the South pole can reach a thickness of only several kilometers. This indicates that in the depths of Enceladus is a powerful source of heat – which is an additional factor that can determine the origin in the ocean of Enceladus life.

Initial interpretation of data gathered with spacecraft, NASA Cassini made several flybys past Enceladus, showed that the thickness of ice on its surface varies from 30-40 km around the South pole to about 60 km near the equator. These models could not clearly answer the question of whether Enceladus global subsurface ocean.

However, opening in 2015, the oscillation of the rotation of Enceladus, known as libration which is connected with tidal effects – indicates that beneath the surface of the planet has a global ocean, and that the ice crust has a thickness thinner than expected – about 20 kilometers on average. However, such thickness is not consistent with other data on gravity and topography.

In order to coordinate these various limitations, researchers have proposed a new model in which the upper two hundred meters of the ice crust act like a tight shell.

According to this study, Enceladus is consistently of a rocky core with a radius of 185 kilometres inland of the ocean at a depth of about 45 km, separated from the surface of the ice shell, the thickness of which averages about 20 kilometers, except for the South pole, where the thickness is less than 5 kilometers. This model requires an internal heat source for the information “energy balance” of Enceladus, the researchers note.

The work was published in the journal Geophysical Research Letters.