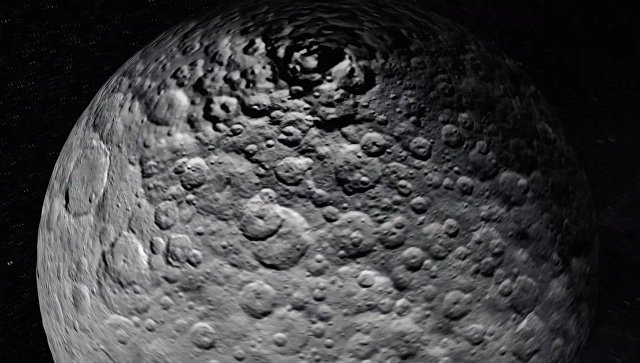 The probe Dawn discovered on the surface of Ceres huge reserves of organic matter, the existence of which scientists had never suspected, the article says.

“If we analyze the spectrum of Ceres, focusing on” cosmic “rather than terrestrial organic matter, then it turns out that about half of its surface is covered by substantial deposits of such compounds, much more than 6-10%, which we spoke about in the recent past” , – said Hannah Kaplan (Hannah Kaplan) from the Southwest Research Institute in Boulder (USA).

The first photographs of Ceres, received by the Dawn probe in March 2015 after its arrival to the dwarf planet, revealed two unusual structures that nobody expected to see: the mysterious white spots in the Okatoria crater, which were traces of a thick brine, and the unusual pyramidal mount Ahuna, over Ceres at four kilometers.

Subsequently, Dawn and his scientific team found out that Ahune is actually an ancient, already “extinct” cryovolcano, and white spots were the source of the temporary atmosphere of Ceres, consisting of water vapor. In addition, in other regions, scientists found deposits of “clean” ice, indicating that the surface of Ceres is continuously updated, since these ice must have evaporated into space long ago, as well as traces of organic compounds.

As Kaplan relates, the clumps of organic matter discovered by Dawn almost immediately after arriving at Ceres were considered an ordinary feature of dwarf planets and did not arouse much interest among planetologists before the probe found the first hints of the existence of a water ocean in the bowels of Ceres.

This discovery led scientists to think about how the organic matter present on the surface of the dwarf planet and in its interior could affect the composition of the waters of this ocean and its evolution in the past. Such ideas, in turn, prompted Kaplan and her colleagues to re-analyze the data on the Ceres spectrum collected by Dawn, and to recalculate the share of organic matter on its surface.

Fulfilling these routine measurements, scientists noticed that the rocks on the surface of Ceres were closer in composition to the so-called carbonaceous chondrites, one of the most common types of asteroids than to the Earth and to other planets. This led them to assume that its organic stocks may have a similar origin.

Such a hypothesis, in turn, has one important consequence: the “cosmic” organics have a completely different composition and spectrum than those compounds that can be found on Earth, Titan and other planets of the solar system, and otherwise interact with water. Relying on this assumption, scientists re-analyzed the data collected by infrared spectrometers Dawn.

As it turned out, on the surface of Ceres there is much more organic than scientists previously thought – it covers about half of its surface, rather than 6-10%, as the members of Dawn’s scientific team believed earlier.

Such a conclusion was a big surprise for scientists. As Kaplan observes, the presence of such large reserves of organic matter can not be explained by the fact that Ceres is constantly falling chondrites or comets with a similar chemical composition – they will contain either too few of these substances, or too large to “survive” the fall on the dwarf the planet.

As the scientists hope, two other interplanetary missions, Hayabusa-2 and OSIRIS-REx, will help us to solve this riddle by analyzing the chemical composition of chondrites from a short distance and bringing fragments of their rocks back to Earth.