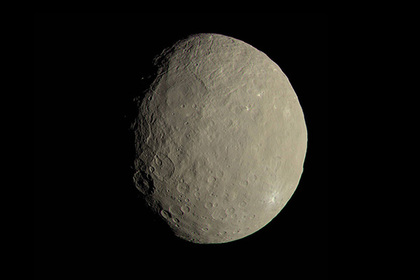 French and American planetary scientists have determined the origin of the surface the largest celestial body in the asteroid belt located between the orbits of Mars and Jupiter — the dwarf planet Ceres.

Scientists came to the conclusion that the surface of Ceres is poor in carbon and, on the other hand, about a fifth part of it consists of silicates. The last came on a dwarf planet, as experts believe, in the fall of the celestial body of the asteroid, presumably belonging to the family of EOS.

To such conclusions scientists came after with the help of Observatory SOFIA (Stratospheric Observatory for Infrared Astronomy) is the study of the dwarf planet. Ceres was the third celestial body, after the yapet (Saturn’s moon) and Charon (moon of Pluto), a significant part of the surface which is generated by an external matter.

Ceres discovered in 1801 by Italian Giuseppe Piazzi and named after the Roman goddess of fertility. The outer diameter of the object is about 940 kilometers, making it the largest celestial body in the asteroid belt between the orbits of Mars and Jupiter.