On Ceres is life? 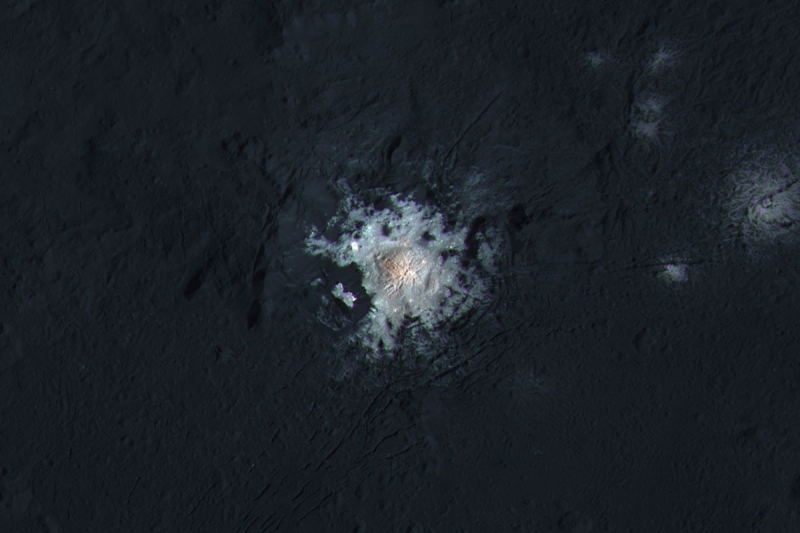 Bright spots on dwarf planet Ceres continues to confuse scientists. When a team of astronomers led by Paolo Molaro of the Astronomical Observatory of Trieste in Italy recently conducted observations of these features, she found something unexpected. Scientists were surprised to find that those spots become brighter during the day, as well as demonstrate other changes. This variability still remains a mystery.

Bright features on Ceres were discovered by the NASA spacecraft Dawn orbiting the dwarf planet, constantly gathering about her interesting information. These spots reflect so much more light than their much darker environment. The composition of these features is still under discussion; scientists can’t decide whether they consist of water ice, evaporated salt or something else.

Molaro and his colleagues studied the spot on Ceres in July and August 2015, using the HARPS instrument. This device, mounted on the 3.6-metre telescope at the La Silla Observatory in Chile, allows the measurement of radial velocities with the highest accuracy available today.

Using HARPS, the scientists found unexpected changes mysterious stains. However, at first, they decided that it was a tool problem. Rechecking everything, they came to the conclusion that anomalies in the radial velocity were absolutely real. And then, the group noticed that they correspond to the periods of time when bright spots Okkator of the crater were visible from the Ground. Between them made the connection.

Funny, but scientists still have not found a plausible explanation for the appearance of these spots.

“We don’t know anything about these changes, really. From this spot become more and more strange,” says Molaro.

One of the proposed hypotheses is that the observed changes could be caused by the presence of volatile substances that are evaporated under the action of solar radiation. When the spots are on the side lit by the sun, they form plumes that perfectly reflect the light. Scientists think that these plumes quickly evaporate, lose reflectivity, and produce the observed changes.

“We already know that under the surface of Ceres, there is a lot of water, so water ice or clathrates hydrates can explain. The exact response we get from scientists working with the Dawn probe in the coming months,” says Molaro. He also noted that changes should be confirmed by direct recording of the bright spots of Okkator in the highest of the available resolutions.

If the theory of the team of scientists confirmed, Ceres turns out to be active inside. Although the dwarf planet is rich in water, it is unclear how it is associated with bright spots. In addition, because of the huge water-tank Ceres put forward as a suitable place to stay for microbial life.

“Life as we know it on Earth needs liquid water, biogenic elements and a stable source of energy. Ceres is a great place where everything is there for a long time, maybe billions of years. Who knows what else there is,” said Molaro.