On Ceres there are traces of a giant ancient ocean 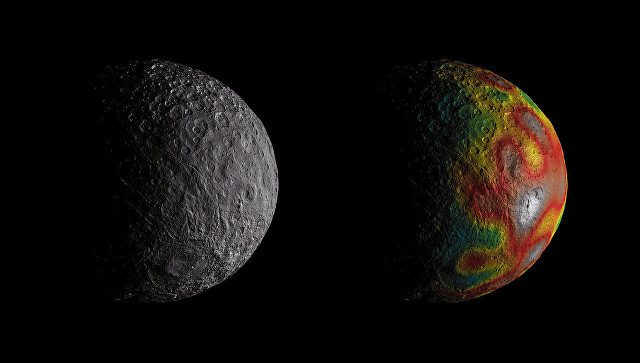 Dawn probe found the first hint of the existence of a giant subglacial ocean on Ceres, whose waters in the distant past covered most of the surface of a dwarf planet, according to NASA’s Jet Propulsion Laboratory.

“The more we learn about Ceres, the more we understand that it is a very complex world that in the past could have had an ocean of liquid water on the surface, the remains of which could have been preserved in the bowels of a dwarf planet,” said Julia Castillo-Roges Julie Castillo-Rogez), the scientific leader of the Dawn mission.

Since February 2015, when Dawn discovered the mysterious white spots in the crater of the Occator on the surface of Ceres, scientists began to think that in its bowels or on its surface can hide enough large water reserves that can generate such bright regions, the nature of which is salt deposits and soda – was discovered only recently. There are even suggestions that under its surface can hide a liquid ocean of salt water.

Since Ceres is located close enough to the Sun, this hypothesis posed to scientists another riddle – how water can exist on its surface and not be evaporated by the rays of the Sun for billions of years of the existence of the solar system. One of the simplest options for answering this question is the presence of craters on Ceres, where the rays of the luminary never fall.

Observations of gravitational anomalies in the interior of Ceres showed that the upper layers of its crust are closer to ice in their density than to rocks, but they are much stronger than pure ice. In other words, if Ceres consisted of ordinary ice, its surface would not be as stable as it really is.

The reason for this, as shown by computer models of the bowels of a dwarf planet, may be that these water supplies are not pure ice – some of them are so-called clathrates, a combination of water, methane and other gases. Clathrates are very strong and stable material at sufficiently low temperatures, which can explain why Ceres retains its form.

Traces of this ocean, as suggested by the mission members Dawn, may be lurking in those regions of Ceres, where the probe sensors recorded areas of relatively low density in relation to the surrounding clathrate deposits.

These remains of the ocean can periodically hit the surface of a dwarf planet during eruptions of cryovolcanoes, like the mysterious pyramidal mount Ahun, opened by Dawn chambers during the first days of its operation in orbit of Ceres.