On Mars every day rage millions of “dust devils” 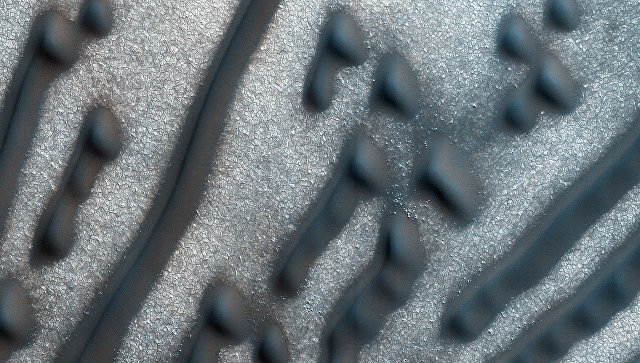 Satellite weather maps on Mars have shown that millions of “dust devils”, small sandstorms appear on its surface every day, whose number has been underestimated by scientists tens of times, according to an article accepted for publication in the journal Icarus.

“Dust on Mars plays the same role as water in the Earth’s atmosphere – it is the main” conductor “of the Martian weather.The understanding of how this dust rises into the air is the key to understanding the weather processes on Mars, and without that we simply do not We will be able to understand how different atmospheric processes work on the red planet, “explains Mark Lemmon, an astronomer at the Texas A & M University in College Station, USA, whose words are cited by the online edition of New Scientist.

On Mars, unlike the Earth, the main driving force of all climatic processes and the cause of soil and rock erosion are not rains, seas and rivers, but winds, air currents and dust storms. The first high-quality images of Mars, obtained by NASA in 1985 after the arrival of the Viking probe, showed that such storms occur on the red planet incredibly often, and that they can pose a greater threat to future travelers and colonists.

In addition to major storms, on the surface of Mars, as mysterious dark lines on the surface of some dunes and craters show, small hurricanes, so-called “dust devils”, with a diameter of about 100 meters and lasting several minutes, often appear. Because of their small size, it is almost impossible to see them from orbit, which hinders the assessment of how often they arise and what threat they may have for the marsonauts.

Brian Jackson of Boise State University (USA) and his colleagues were able to count the number of such “dust devils” and estimate how much dust they throw out the atmosphere, drawing attention to how they act on the local climate in different parts of Mars.

As scientists explain, the emergence or passage of the “dust devil” on this or that part of the planet’s surface leads to the fact that the atmospheric pressure drops sharply, and the speed and direction of the winds movement over these sections change markedly.

These changes, in turn, are reflected in the weather and climate, which allows us to use observations of fluctuations in the pressure and nature of the movement of winds to estimate the number of vortices on the surface of Mars.

Guided by these ideas, Jackson and his colleagues analyzed the surface images obtained by the MGS probe and its “heirs”, as well as measurements of the barometers and other climatic scientific instruments installed on the Phoenix module and the Curiosity rover.

As these calculations have shown, dust vortices appear on the surface of Mars about 10 times more often than previously thought by scientists. Every day, according to Jackson and his colleagues, on Mars there can be simultaneously several millions of “dust devils”, whose diameter is about 10-20 meters, and not 100 meters, as previously thought. In fact, on every square kilometer of the surface of Mars, there must exist at least one “devil”.

A large number of such eddies, according to Jackson, can pose a great danger for future expeditions to Mars, since friction of dust particles in the dry air of Mars will generate powerful electric fields that can damage the electronics of descent vehicles, spacesuits and other gadgets.