On Mars found a relief that looks like a face 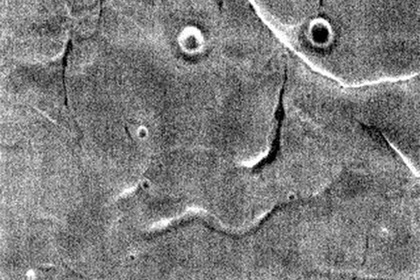 The orbital station Mars Odyssey discovered on Mars a geological relief resembling a human face. The snapshot is available in the NASA photo journal.

The image is made by the scientific instrument THEMIS (Thermal Emission Imaging System) of Mars Odyssey station. “Do you see what I see? Is that face looking at me? “NASA joked about the new face image.

Previously, a photo taken in 1976 by the Viking 1 station acquired popularity. It can be viewed as a relief in the form of a human face. Human likeness turned out to be an illusion caused by the play of light and shadow, as well as the low resolution of the spacecraft camera.

The automatic device Mars Odyssey was launched to Mars on April 7, 2001. On October 24 of the same year he reached the Red Planet. The device received its name in honor of the best-selling book of Arthur Clarke (and Stanley Kubrick’s film of the same name) “2001: Space Odyssey”. It was Mars Odyssey that discovered water ice beneath the surface of the circumpolar regions of the planet.