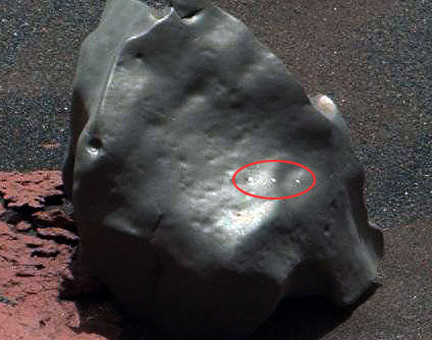 The Rover is exploring the Gale crater, found metal object. NASA published a picture sent by Curiosity from the surface of the red planet.

NASA believe that the Mars Rover found another iron meteorite lying on the surface, this is the third meteorite discovered over the 4.5 years of the study of Mars.

The object has a gray metallic luster and the characteristic surface texture, reminiscent of regality – depressions formed in the evaporation of soft inclusions during heating of the meteorite in the atmosphere.

Three bright dots on one line on the surface of the meteorite are possible signs of the impact of ChemCam laser mounted on the Rover. With its help the analysis of the spectrum of light emitted by the evaporated species.