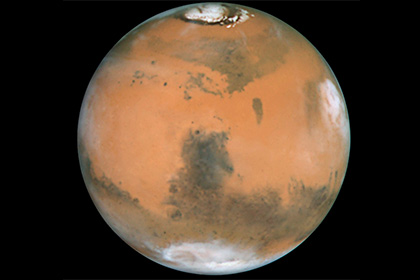 In the ancient Martian ocean fell by two asteroids, which led to the emergence of a megatsunami. These are the conclusions of Geophysics from the EU, USA and China. Dedicated to this study published in the journal science, briefly about it, reports EurekAlert!

On the basis of geomorphologic and thermal images of the outflow channels (long and wide lowlands, caused by the prolonged floods and erosion) and the Arab lands in the North of the planet, scientists showed that around 3.4 billion years ago to its surface fell two asteroid.

All they left a few impact craters with a diameter of more than 30 kilometers each. Their traces are still visible today on Mars. Scientists carried out a numerical simulation showed that as a result of catastrophic events on the planet there were two tsunami waves with a height of about 100 meters each.

The first tsunami resulted in the release to land huge masses of liquid water with the formation of the outflow channels. From the liquid together with the fragments of the soil after some time, transported back to the ocean. The second asteroid fell later, when on Mars there was a frozen ocean. The fall of this celestial body sparked a wave, causing the formed second line (because the water is frozen extremely quickly and almost did not return back into the ocean).

The proof of the theory of scientists is the detection of differences between the shore lines of the ocean with a height of 50 meters (for salt deposits and the details of the relief). This difference appeared, as shown by modeling, the impact of the second giant tsunami.

Scientists say that although they found clear evidence of a tsunami in one of the regions of Mars, such phenomena occurred in antiquity regularly in other places of the planet (approximately every three million years Mars has experienced large asteroid).

It is believed that in Hesperia era (3.2 to 3.7 billion years ago) Mars had a dense atmosphere (the pressure at the base of which is comparable with an existing today on Earth) and the hydrosphere (comprising the liquid salt water). Scientists do not exclude that humid climate could contribute to sustaining life on the planet.