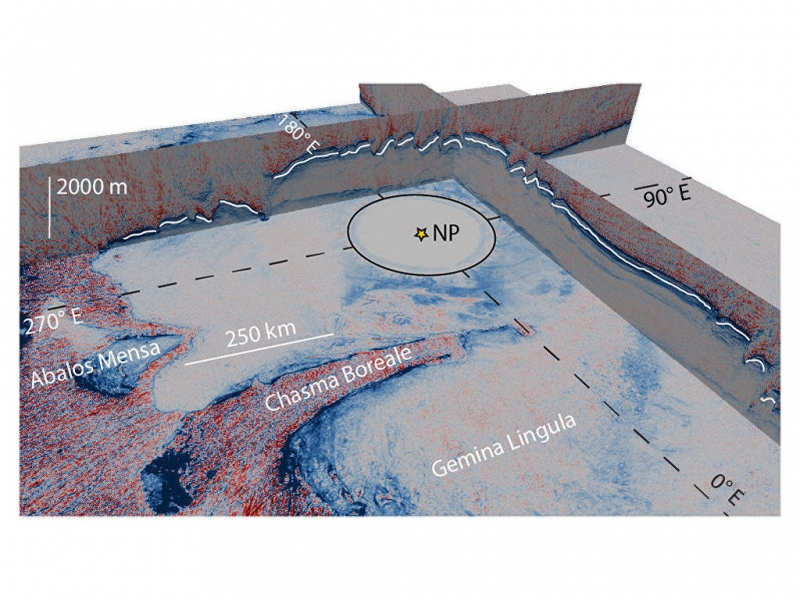 Scientists have discovered irrefutable evidence that on Mars there was a period of glaciers. The polar caps of Mars, captured radar images show that the approximately 375 thousand years ago on the red planet was the end of the glacial period, from which the planet gradually comes out today.

Isaac Smith of the Southeast research Institute in the United States declares that the climate on Mars changes much greater than on Earth, because its axis of rotation “ranges” much stronger, unlike our planet. From this we can conclude that in the past Mars had a different view than we see today.

Performing analysis of the data using the tools of the probe MRO, when the study of deposits of water ice in the Northern parts of Mars, Smith, along with his colleagues denounced that in the near historical past on the red planet passed ice age. To date, he gradually “thaws”.

As explained by scientists, the onset of glacial periods occurs not when it is cold at the poles, but on the contrary, when there is warming, because only a relatively lukewarm climate contributes to the formation of mobile ice deposits and their “movement” in the middle latitudes of the planet. During the interglacial period on the planet reigns the cold, which contributes to the growth of the mass and the volume of deposits of ice due to the water evaporating in the mid-latitudes.

The approach of the ice in the “hot” stage and their retromania in “cold”, according to Smith, must necessarily leave prints on the surface of the red planet, which is hidden from optical instruments and radars. Among other things, traces the approach and avoidance of glaciers can be detected in the ice at the pole, just counting the pace through which they accumulated or accumulated.

Reviewing and studying many MRO radar images and photos that received probes from the category of “Viking” over 35 years ago, the authors of the article concluded that Mars in the relatively recent past was in “captivity” period of ice.

During the period of retromania glaciers, the surface of the red planet, according to scientists, has accumulated more than 87 thousand cubic kilometers of water ice. This volume of water would be enough to cover the entire surface of Mars to a height of 60 centimeters. The fact this conclusion was news to planetary scientists, they expect to see ice 3 times less than shown by the data collected from MRO tools.

The assurances of Smith, ice holds today. This conclusion is confirmed by the prints of the movement of water along the plane of Mars. A planetary scientist says that if you do not interrupt the observation, it will be possible to understand what kind of take Mars in the near future, and how all this would affect his valid habitability.