On Mars have found traces of shock tornadoes 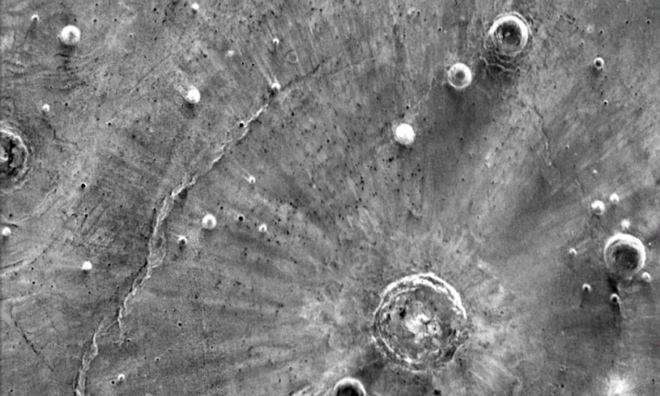 A few years ago, looking at NASA’s Mars images, a geologist from the University of Brown Peter Schultz noticed a number of bright bands emanating from large impact craters on the surface of the planet. The oddity was that they stretched much farther from craters than normal emissions, and were only visible on infrared imaging images taken during the Martian night.

Using data from geological observations, laboratory experiments and computer simulations, Schulz and the graduate student of Brown University Stephanie Quintana proposed a new explanation of how these bands were formed.

Their work shows that once on the surface of Mars swept the vortex, like tornadoes, at a speed of 800 km / h or higher. They were caused by collisions with bodies forming craters, raising dust on their way and tearing down small rocks, exposing the underlying surface below.

“It’s like a F8 tornado. Such a wind on Mars will never happen again, unless another strike occurs, “Schulz said.

For the first time, the scientist noticed the bands when, in between projections, he examined infrared images taken during the Martian night by the THEMIS instrument on NASA’s Mars Odyssey orbiter. Infrared images acquire contrast due to the heat retained on the surface. The areas that retain more heat from the previous day are more prominent than the surrounding ones. Similarly, the grass fields cool at night stronger than the urban environment.

“You would not have detected anything at visible wavelengths, but they are very bright in the night infrared range,” Schultz explained. – Brightness in the infrared spectrum indicates surfaces that retain more heat than surfaces under a layer of dust and debris. So, something has come and cleansed them. ”
Schulz has studied shock and shock for many years using a powerful NASA cannon that can fire shells at speeds up to 24,140 km / h (Vertical Gun Range). “We observed in the experiments what could cause these bands,” he said.

When an asteroid or other body strikes the planet with great speed, tons of material both from the impactor and from the target surface evaporate instantly. Experiments have shown that steam trains move from the point of impact with supersonic speed, if the scale of laboratory impacts on the size of the Martian. And such interactions with the atmosphere of Mars are capable of generating powerful winds.

However, the train and winds did not form strange strips. Loops, as a rule, move slightly above the surface, but when they reach relief obstacles, this breaks the current and causes powerful vortices that descend to the surface. And these eddies, according to scientists, cleared the narrow stripes.

“Wherever vortexes collide with the surface, they sweep away small particles, exposing a larger massive material from below,” Schultz said. According to him, these strips can be useful for establishing the speed of erosion, the deposition of dust and the age of the craters.

Experiments show that the presence of volatile compounds – for example, a thick layer of water ice on the surface or on a subsurface layer – affects the amount of vapor that is released during shocks. Thus, the strips can serve as indicators of whether ice could be present during the impact, and help reconstruct the past climate of Mars.

It is no less probable that the bands are associated with the composition of the impactor, for example, with rare collisions of high-energy objects, such as comets.

“We will continue to study what conditions these bands cause. Surely, they have something to tell us, “concluded Schultz.