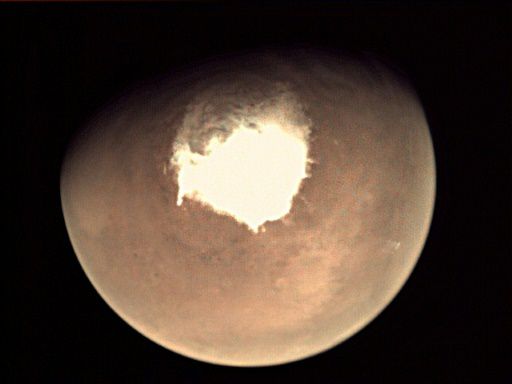 On Mars, powerful snow storms are raging at night, according to a study published yesterday, Monday, which reviews our modern understanding of the weather on the Red Planet.

Until now, it was believed that snow falling from low-lying Martian clouds, settles on the surface of the planet slowly, in almost windless conditions.

In this new work, it is reported that the particles of water ice in the course of the “ice storm” reach the surface of the planet for several minutes, rather than settling quietly for hours, as was previously thought

However, it is not necessary for future Martian colonists to take fur boots with them, the main author of the study said in an interview with the news agency Agence France Presse.

“You can not make a snowman or ski there,” said Aymeric Spiga, an expert on the dynamics of atmospheric planets from the University of Pierre and Marie Curie, France.

The atmosphere of Mars is about 100 times thinner than the Earth’s atmosphere, but it is thick enough to have weather phenomena on Mars, including clouds and winds. However, there is very little moisture in the atmosphere of the Red Planet. In fact, Mars is an icy wilderness, on the surface of which there is practically no liquid water.

In his study, Spiga and his team created a new atmospheric model based on modern data obtained with the help of several NASA Martian vehicles.