On Mars there are volcanoes and flowing lava rivers 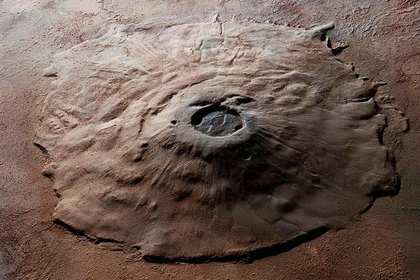 American scientists have presented evidence of the presence on Mars of these volcanoes and lava rivers. This suggests that the red planet is the most long-lived volcano of the Solar system. In addition, a new study sheds light on the many mysteries associated with the development of the planet and even hints at the existence of life on it.

Texas scientists from the University of Houston was subjected to detailed examination by a meteorite NWA 7635 having a Martian origin. The weight of NWA 7635 is about 200 grams it relates to shergottites, leaving the Red planet over a million years ago and was found in Northwest Africa in 2012. Martian meteorites are some of the most rare. According to data for 2009, from 24 thousand of the meteorites found on Earth, only 34 stone from Mars.

Analysis of the composition of the meteorite allows you to learn a lot about his age, place of occurrence and about how long it is on the Ground. First, the researchers conducted isotopic analysis of NWA 7635 and using Dating in Samaria, and to the neodymium found that he about 2.4 billion years.

With him on the Ground was found ten such cosmic bodies around the same time and origin. According to the theory of scientists, about a million years ago a body fell on the surface of Mars and were either in a volcano or in a lava plain. The study’s lead author Professor Thomas Lapen (Thomas Lapen) sure that all 11 stones appeared in the same place on Mars. In the future he plans to conduct a detailed analysis of all 11 meteorites, as they store critical information about Mars. Since the age of NWA 7635 and similar bodies is 2.4 billion years, this suggests potential existence on Mars most long-lived volcano of the Solar system.

According to previous research, volcanic activity on Mars ceased in a period of one to 20 million years ago. Evidence of this was found interplanetary station of the European space Agency’s “Mars Express”, launched in 2003. Scientists estimate that once the entire planet was frozen over, volcanic activity continued in the province of Tharsis, which are the largest in the Solar system volcanoes — mount Olympus, Scricca, Peacock and Arsiya.

Some experts say that the activity continues to this day as some of the volcanoes on the surface of Mars is relatively young. One of the developers of the project “Mars-Express” Agustin, Cicero explains that even if it exists, is not necessarily expressed in large eruptions.

Agency NASA for research of the volcanic activity of Mars used the infrared telescope IRFT at the top of the volcano Mauna Kea on the island of Hawaii, at an altitude of over four thousand meters. A team of scientists engaged in the search for signs of sulfuric acid, which is a key indicator of volcanic activity. Most attention in the study they are giving to the provinces of Tharsis and the Great Sirte.
Observations from the Ground using a large optical telescope in Chile and the radio telescope at the Palomar Observatory of the California Institute of technology has not brought positive result. So to fix the molecules of sulfuric acid it was decided to use radio telescopes, as they are quite easy to recognize on the waves of such length. During observations in 2012 and 2014 experts failed to record any activity, although they do not rule out recent eruptions.

But as a result of ground-based observations, scientists are unable to detect traces of volcanic activity, which experts agree in opinion that Mars is on the verge of “geological of death”: because of the end of volcanic activity on the planet, apparently, stopped the cycle of minerals and chemicals between the surface and inner part of the planet.

In order to completely verify this, it is planned to use a set of three spectrometers NOMAD (Nadir and Occultation for Mars Discovery), mounted on an orbital apparatus TGO. It aims to search not only vulcanismo — energy that is necessary for life, but also organic substances that could be byproducts of this life.

According to experts, the telescopes allow to see the full picture, so the study of Martian meteorites remains one of the main ways to obtain new information about the red planet. So, for example, in 1996, NASA scientists said that the meteorite ALH 84001, which was found in Antarctica in 1984, may contain evidence for traces of life on Mars. This is the opening even said on TV then US President bill Clinton.

According to assumptions of researchers, the stone broke away as a result of collision of Mars with a large space body about four billion years ago, then remained on the planet. In the gravity field of the Earth ALH 84001 were only 13 thousand years ago. On the stone were identified fossils that recalled the “footprints” of the earth’s organisms, the so — called magnitostaticheskikh bacteria.

This discovery has repeatedly been criticized, since direct evidence of alien life so far was not provided, and the slotted structure on the ALH 84001-like microorganisms were too small in size. In addition, there is a possibility that life got into the meteorite after the fall, and therefore has a terrestrial origin. Despite this, in 2014, scientists from’s Johnson Space center and the jet propulsion Laboratory made a similar statement, but regarding the meteorite Y000593.

“While robotic missions to Mars explore the geological history of the planet, Martian meteorites — the only samples that we have to solve the riddle of the origin of life,” said Lauren white (Lauren White), who heads a research group in 2013.

She claims that only in terrestrial laboratories have the necessary tools for the study of life on other planets, and the history of their development. Although after the experience with the ALH 84001 experts do not hasten to do loud statements.