On Neptune was a huge dark vortex 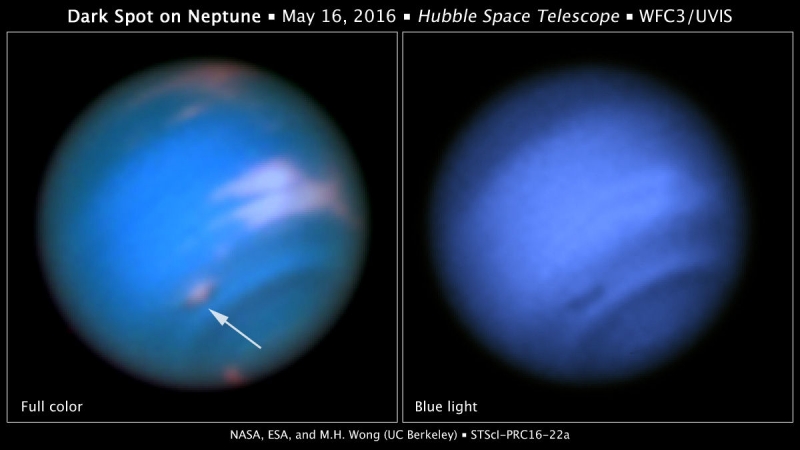 New images obtained on 16 may 2016 at the space telescope “Hubble”, confirm the presence of a dark vortex in the atmosphere of Neptune. Although such education was observed during the flyby of this planet, the probe Voyager 2, NASA in 1989 and with the help of the space telescope “Hubble” in 1994, this atmospheric vortex became the first event of its kind observed on Neptune in the 21st century.

The discovery was announced on may 17, 2016 in an electronic telegram to the Central Bureau of astronomical telegrams, sent by an employee of the University of California at Berkeley Mike Vaughn, who heads the team that conducted the analysis of data obtained with the help of Hubble.

Dark vortices of Neptune represent a system with high blood pressure and is usually accompanied by a bright “cloud companions”, which also currently can be seen on this distant planet. These bright clouds are formed in the case where the air flow is deflected upwards, encountering the dark vortex, causing the gas kristallizuetsya methane ice.

Planetary scientists are actively trying to understand the nature of dark vortices on Neptune, so observations of this newly discovered atmospheric phenomenon and its evolution can deepen our knowledge about those dark eddies, and the structure and dynamics of the surrounding atmosphere.