On the comet Churyumov-Gerasimenko found the amino acid 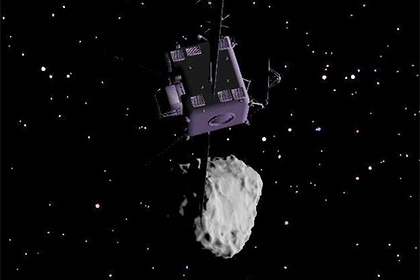 Scientists of the Rosetta mission reported on the direct detection of the amino acid glycine in the coma of comet Churyumov-Gerasimenko (the cloud of gas and dust around the nucleus of a celestial body).

Only scientific instrument ROSINA (Rosetta Orbiter Spectrometer for Ion and Neutral Analysis) detected in the cometary atmosphere 25 molecules of glycine. Also, the mass spectrometer found the precursors of amino acid, methylamine and ethylamine and phosphorus involved in the construction of RNA and DNA.

Discovery scientists is of great importance in the question of the origin of life on Earth. Scientists believe that the major fragments for its occurrence could get to the planet from meteorites or comets. The first amino acid (glycine) on the comet wild found the NASA spacecraft Stardust. Nitrogenous base (uracil and xanthine) was first discovered in the Murchison meteorite in 2008.

Comet Churyumov-Gerasimenko belongs to the group of short-period (its period of revolution is equal to 6.6 years), the size of the semimajor axis of the orbit is slightly more than 3.5 astronomical units, the linear dimensions of the nucleus are of the order of several kilometers. To study the comet was organized mission Rosetta with the descent module Philae. Peak of the mission took place in November 2014.