On the comet Churyumov-Gerasimenko landslides occur 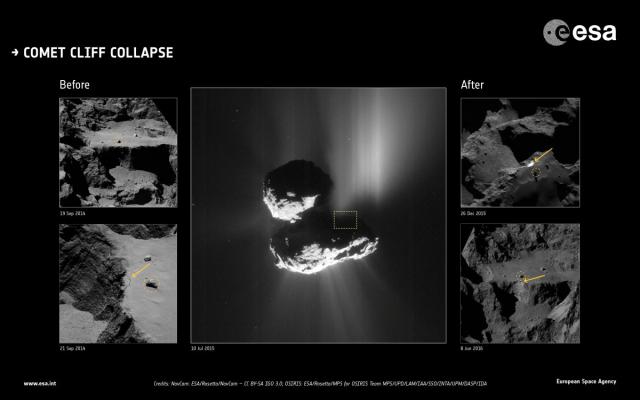 Scientists have received evidence that landslides occur on the comet of Churyumov-Gerasimenko. The photographs obtained by the Rosetta apparatus show how part of one of the cliffs on the comet collapsed, which led to the release of dust and gas.

The probe Rosetta in September 2014 received pictures of a cliff called Aswan. In the photo there was a large crack 70 meters long and 1 meter wide at the top of the ledge. On July 10, 2015, the camera recorded a dust outflow, the source of which was in the same area. Five days later fresh pictures showed that part of the ledge collapsed. The scientists had no doubt that the release was associated with this event.

Astronomers modeled the conditions on the surface of the comet at the time of collapse. According to the calculations of specialists, in July 2015 the temperature in the Aswan cliff area was minus 143 degrees Celsius. In just 20 minutes after its surface emerged from the shadows and fell under direct sunlight, the temperature increased to 46 degrees Celsius. This area was under the Sun every 12 hours for 1.5 hours.

After the collapse, the bare part of the rock was 6 times brighter than the surrounding surface. By December 26, 2015, the brightness of this part decreased by half, which indicated the continuing process of evaporation of water ice. By August 6, 2016, the entire slope of the cliff looked homogeneous except for one large light area. 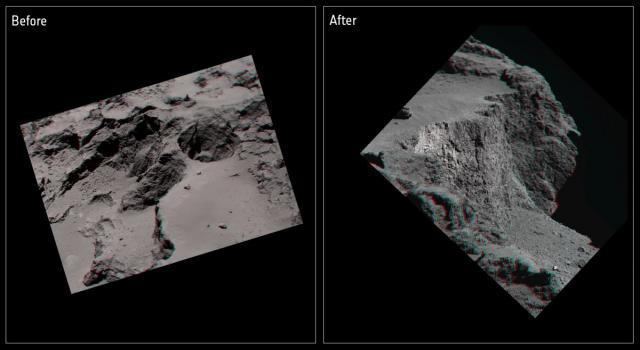