On the exoplanet found a large amount of water 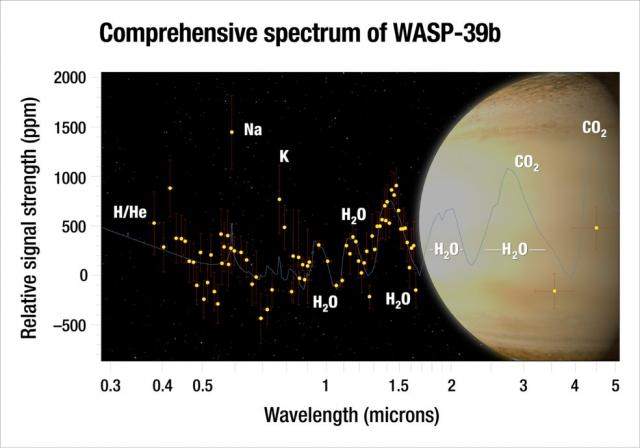 Scientists NASA thanks to the data collected by space telescopes Hubble and Spitzer, found in the atmosphere of hot, comparable in mass with Saturn, exoplanets traces of a large amount of water in the form of water vapor. The object under the designation WASP-39b is located at a distance of 700 light years from us.

According to experts, the planet has three times more water than Saturn. According to scientists, this may indicate that the planet was formed quite far from its star, where it was bombarded by objects containing ice. Over time, she migrated closer to the star.

WASP-39b revolves around a calm sun-like star, located in the constellation Virgo. The planet makes one revolution in 4 days. WASP-39b is 20 times closer to its star than Earth from the Sun. Because of the gravitational effects of the star, the exoplanet is always facing one side. The temperature at the side facing the star is 776.7 degrees Celsius. Winds contribute to the transfer of heat to the dark side of the planet.

Although the object is called “hot Saturn”, it is not confirmed that it has rings.