On the moon there are constant “rains” of asteroids 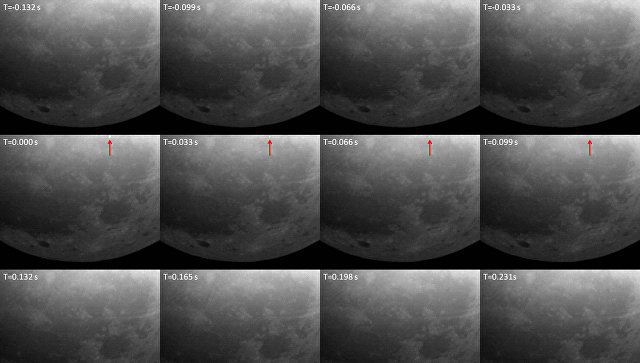 Astronomers watching small asteroids like the Chelyabinsk meteorite have found that the moon constantly receives “rains” from small debris of asteroids that are virtually continuously bombarding its surface, the press service of the European Space Agency reports.

“Our dual cameras allow us to see flares on the surface of the moon, which no one could previously do with a single telescope.” Collecting data for the next 22 months will help us understand how many asteroids 10 meters in diameter and less live in the vicinity of the Earth. Moreover, these data will help us to uncover the physics of outbreaks and to understand the objects of what mass they cause, “says Alceste Bonanos of the Institute of Astronomy of Greece in Athens.

In the past few decades, scientists around the world have been actively monitoring near-Earth asteroids and are conducting a kind of space “census” among them, trying to understand how dangerous they are to humanity. There are so many asteroids in the near-Earth space that astronomers had to create special scales to assess how likely they fall to Earth.

Despite all this and the huge number of asteroids discovered in recent years with the help of ground-based telescopes and the infrared orbital observatory WISE, many large asteroids and countless smaller objects the size of the Chelyabinsk meteorite that fell to Earth in February 2013 remain unknown to us.

The NELIOTA project has begun to detect flashes of light caused by tiny pieces of rock striking the #Moon's surface: https://t.co/5YGFxKAUyU pic.twitter.com/CnSJdHdkIU

To meet this challenge, ESA created the NELIOTA project, within which a 1.2-meter telescope installed at the Kryoneri observatory in Greece was upgraded specifically for observing asteroids in near-Earth space. To this end, ESA engineers and astronomers have installed several ultra-fast, high-resolution cameras capable of seeing traces of falls of even the smallest objects on the surface of the Moon.

NELIOTA, according to Bonanos, was launched in February 2015, but its full-fledged work began only in March of this year, when a second camera was installed in Kryoneri, greatly increasing the resolution and sensitivity of the telescope and allowing it to monitor the sky in real time.

As the first observations of the surface of the Moon in March and April showed, constant “stone rains” are taking place on the satellite of our planet – in just 11 hours of observation, scientists managed to fix four drops of small asteroids the size of the Chelyabinsk meteorite, localize their craters and measure their temperature at the time of birth These funnels.

As expected by planetologists, for 22 months of operation the telescope in Kryoneri will record thousands and tens of thousands of similar outbreaks and episodes of falling asteroids. These data, according to astronomers, will help us estimate the number of potentially dangerous asteroids in the vicinity of the Earth and find out how often they fall on its surface and what consequences this usually leads to.