On the planets of “dead” stars can exist life 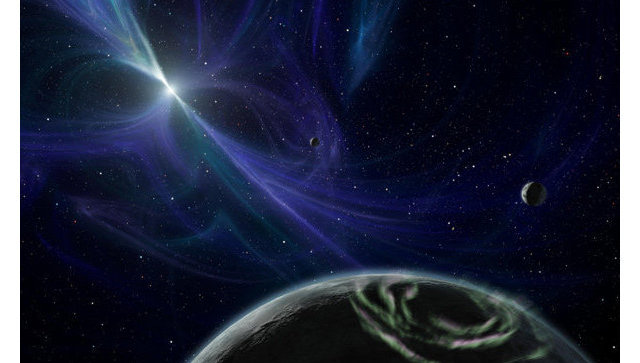 Life can exist on the surface of planets orbiting pulsars if their atmosphere is sufficiently dense to convert most of their X-rays and high-energy particles into heat, astronomers state in an article published in the journal Astronomy & Astrophysics.

“Our calculations show that the temperature on the surface of planets that are fired in a similar manner by pulsars will be high enough for water to exist in a liquid form on their surface.On the other hand, we do not yet know whether planets revolving around pulsars, a suitable atmosphere for this, “said Alessandro Patruno of the University of Leiden in the Netherlands.

In recent years, planetologists have discovered almost two thousand planets outside the solar system, almost all of which revolve around “normal” luminaries. Interestingly, the first exoplanets were discovered in the “twin” of the Sun or red dwarf, and in the vicinity of the pulsar PSR B1257 + 12 in 1992 and 1994. Two more such planets were found at the pulsar PSR B1620-26 in 2000.

These planets, despite a similar composition to the Earth and relatively small size, were virtually considered to be lifeless from the very beginning – scientists assumed that powerful beams of X-rays and high-energy particles had to completely destroy life on their surface, if it existed. Even if the inhabitants of such worlds could somehow protect themselves from such problems, the very process of forming neutron stars – a supernova explosion – had to completely destroy the atmosphere and any traces of life on their surface.

In recent years, as noted by Patruno, scientists have found that planets can form in the vicinity of pulsars after the death of the star from its “remains” or fragments of the shells of its companion, which made them think about whether such worlds have an atmosphere and whether the most primitive ones life forms somehow survive on their surface.

Patruno and his colleagues Mihkel Kama from the University of Cambridge (UK) checked whether this is really so, studying the properties of the three planets orbiting the PSR B1257 + 12. All these worlds are among the earth-like planets, and, as astronomers suggest, they can have an atmosphere and significant water reserves.

The main threat to life on their surface, as scientists say, will be X-rays and high-energy particles that will disperse the powerful magnetic field of the “dead star.” The strength of this radiation and the number of particles were measured by astronomers using data collected by the Chandra telescope during observations of PSR B1257 + 12.

As shown by these measurements, the strength of this radiation and the particle flux will be modest enough so that planets that are at a great distance from the “star”, about 2-5 astronomical units, average distances between the Sun and the Earth, could tolerate their action.

To do this, however, it is necessary that such planets have sufficiently large dimensions, an “earth” magnetic field and a dense atmosphere that prevents the x-ray and particles from reaching the surface and preventing the rapid escape of its molecules into space.

According to these calculations, the last two planets of PSR B1257 + 12, as Patrino notes, are on the border of the “zone of life” – a special “bundle” of orbits in this pulsar, where water can exist in a liquid form due to the heating of the planet under the influence of X-rays and particles of high energy.

According to scientists, this fact, given the existence of about 10 million planets in pulsars in the Milky Way, suggests that potentially inhabited worlds can exist in the vicinity of “dead stars.”