On the satellite of Jupiter Io there is no magmatic ocean 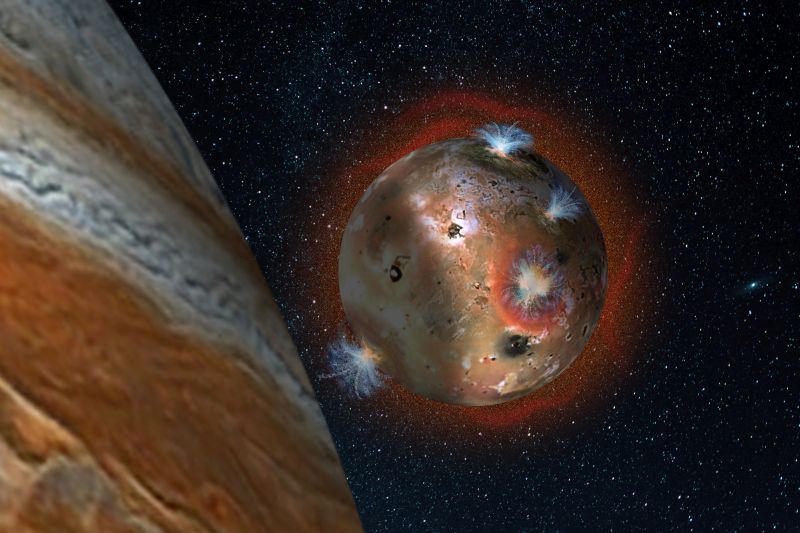 With the help of the Hubble Spacecraft, scientists discovered the northern lights on the natural satellite of Jupiter, which is known by the mythological name of Io.

So called the priestess of Hera and beloved Zeus. Io is the closest companion to the parent planet of the four major Galilean moons of Jupiter.

As reported by the researchers, the detection of bright auroras on the surface of Io practically excludes the presence of a magmatic ocean beneath the surface of this satellite.

The polar shines of Io are in synchronization with oscillations in the magnetic field of Jupiter. But the authors of the study say that Io’s inner ocean, consisting of magma, would have to suppress these vibrations.

“Our results indicate that the magma ocean can not be present on Io’s satellite, but this idea conflicts with the previous hypothesis,” said Lorenz Roth, a planetologist from the Swedish Royal Institute of Technology and author of the new study.

“We really believed that in the bowels of Io the magmatic ocean is hidden, but significant fluctuations in the polar aurora of this satellite contradict even the very possibility of the existence of this ocean,” the scientist says.

The magnetic field of Jupiter shields its satellites from the effects of the Sun, blocking charged solar particles. This is exactly the same as the Earth’s magnetic field that protects our planet from certain types of solar radiation. However, the auroras appearing on the Io surface appear from charged particles emanating from the gas giant Jupiter itself. During the 10-hour rotation of Jupiter, the number of charged particles that bombard the surface of Io varies, so there are also jumps in the polar lights on this satellite.