On the star saw a giant anomaly 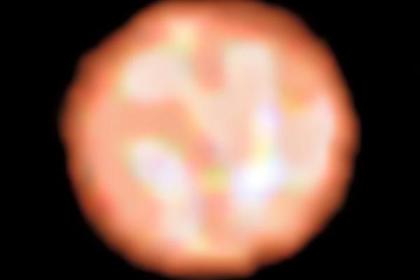 An international group of astronomers discovered anomalous convective cells on the red giant π1 Gruis, located 530 light years from Earth. The dimensions of these bubbles, caused by plasma convection, reach 120 million kilometers, which is a quarter of the diameter of the star itself.

Scientists have studied the details of the surface of the red giant in the infrared range with the help of a complex of telescopes Very Large Telescope in Chile. The huge granules are hundreds of thousands of times larger than similar formations on the Sun, the diameter of convective structures of which reaches only 1,500 kilometers. The researchers believe that this is due to the fact that the mass of π1 Gruis is only 1.5 times the solar mass, but the diameter of the giant is 700 times larger than the Sun.

Red giants are formed when hydrogen does not burn out in a very massive main sequence star. It begins to contract, as a result of which its subsoil warms up, and the processes of fusion of helium atoms into heavier elements (carbon and oxygen) begin. Eventually, the star dumps the outer layers and a white dwarf remains.