On the sun appeared a figure, similar to the “heart” 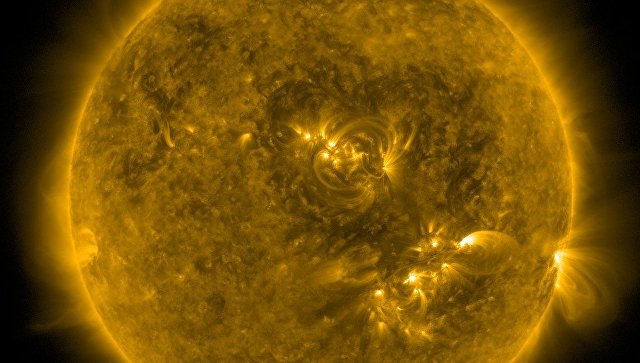 On the surface of the Sun, a kind of “heart” emerged from the lines of the magnetic field, whose center was directed toward the Earth, according to the Laboratory of X-ray Astronomy of the Sun of the Lebedev Physical Institute of RAS.

“Such an amazing sign of the will of the case turned out to be formed on the surface of our star by the magnetic fields located here.” The outer contour of the figure was “drawn” by cold magnetic loops looking darker, and in the center of the heart was a bright hot active region .The figure was about one million kilometers, – Scientists write.

On the Sun periodically there are various kinds of figures, similar in shape to birds, giant arrows, continents and other objects on Earth, which have nothing in common with them. Similar “patterns” appear on the surface of the star accidentally, as a result of complex interactions of magnetic fields in its interior and on its surface, and observations of them, as the scientists hope, will help us eventually understand how to predict the activity of the sun.

In the night from Monday to Tuesday on the surface of the luminary appeared another such figure, like a kind of “heart”. It lasted for several hours, after which it “dissolved” in the surrounding environment. Interestingly, its center was at the point of the surface of the Sun, which is now looking at the Earth.

This is not the first cosmic “heart” discovered by scientists – the most interesting and more permanent structure of this kind was found on Pluto in July 2015, when the New Horizons probe flew past him. As scientists suspect today, a similar structure may be present on the dwarf planet 2010 JO179, recently discovered beyond the orbit of Neptune.