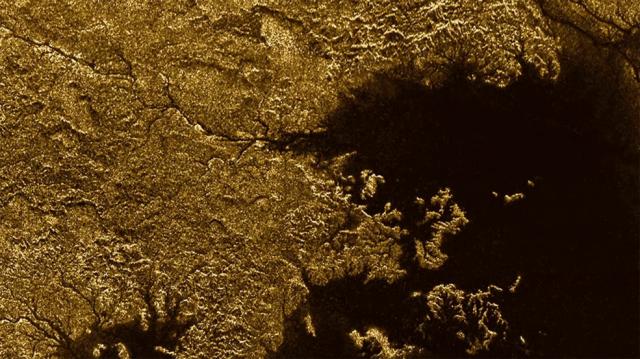 NASA’s Cassini found on Saturn’s moon Titan deep, with steep slopes, canyons, filled with liquid hydrocarbons. The depth of the canyons up to several hundred meters.

Canyons on Titan was able to identify after analyzing the data obtained by the Cassini radar during a flight over the moon of Saturn in may 2013. The main objects for study, Cassini was channels emanating from a large Sea Legei, located in the Northern hemisphere of Titan.

Observations made by machine, showed that the channels, in particular Channels View (Vid Flumina), represent narrow canyons, the width of which, as a rule, does not exceed kilometer. The slopes of the canyon are very steep. The angle of inclination is more than 40 degrees. Discovered the canyons very deep. Their depth is 240-570 M.

The network of channels looks dark in the pictures, the same as methane sea on Titan. This allowed the scientists to assume that the channels are filled with liquid hydrocarbons. However, until now direct evidence for this was not. Previously, it was unknown whether the dark material is liquid or which has changed its color deposits.

According to scientists, the canyons on Titan could be formed as a result of raising the surface area, sea-level changes, or the impact of these two factors simultaneously. On Earth an example of canyons, formed by the uplift of the plateau and the associated water erosion is the Grand canyon in Colorado.

The liquid level in some of the canyons corresponds to sea level Ligai. In some canyons this level for a few tens of meters above sea level. According to scientists, this is due to the tributaries that flow into the main channels.