One more secret of “ice heart” of Pluto is revealed 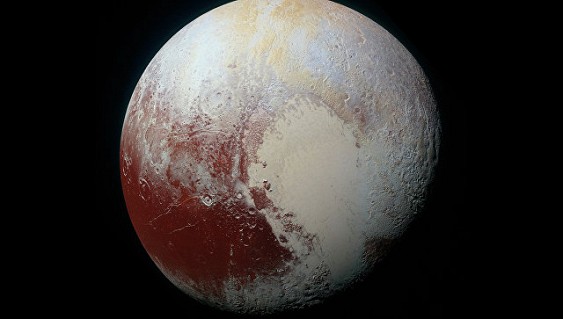 The well-known plains of the Satellite where bright “heart” of Pluto is located, could arise on his surface and get the current form even in case to Pluto the large asteroid, mixed as today astronomers consider, in the birth of this form of a relief didn’t fall, it is told in article published in the Nature magazine.

“Big heart of Pluto was too heavy burden for the small planet therefore she developed a depression. Something similar has happened to Earth when Greenland has crusted from ice. She “has squeezed out” crust in the parties, has created in her deepening and has generated gravitational anomaly” — Douglas Hamilton from university of Maryland in College Park (USA) has declared.

When the probe New Horizons has approached Pluto and its family of satellites in June of last year, well-known “heart” of Pluto, the plain of the Satellite painted in lighter tone than all other surface of the dwarf planet became the first and most unusual line of his surface which has been opened by scientists.

This form of a relief as today planetologists consider, being based on the data from the probe New Horizons, has arisen far back in the past Pluto as a result of falling of a large asteroid whose diameter most likely exceeded 200 kilometers. As a result of this cataclysm on the surface of Pluto there was a dent about 4-5 kilometers in depth which has strongly changed climate of the planet and has gradually been filled with nitric and carbon dioxide ice.

Gradually in this dredging of ice has accumulated very much that it has begun “to pull” the planet down therefore the plains of the Satellite which earlier were at poles of Pluto have gradually moved towards his equator and began to look always at Charon, the largest member of “suite” of Pluto.

As Gemilton considers, leaning on the mathematical models of climate and a subsoil of the dwarf planet created by him, the first stage of this process – falling of an asteroid – isn’t obligatory for formation of plains of the Satellite in the form in which they exists today.

According to the scientist, his calculations show that “ice heart” of Pluto could be created in early years of his existence when the dwarf planet rotated quickly enough. It has arisen at poles of Pluto thanks to two unusual things – his severe climate and an inclination of an axis of his rotation by 120 degrees that actually forces Pluto to rotate on one side.

Thanks to sharp differences of temperatures and an unusual inclination of an axis of Pluto as Gemilton tells, not his poles, but narrow strips in midlatitudes, approximately on 30-40 degrees of northern and southern latitude will be the coldest places on the planet, a paradoxical image.
Over time there were large glaciers which have made these regions colder because they reflected light stronger, than other sites of a surface of Pluto. It has accelerated accumulation of ice and has led to the fact that through several hundreds of millions of years his quantity has exceeded a certain critical point, and future “heart” of Pluto has pressed through his bark, having created deep “crater”. It has lowered air temperatures and has forced ice to accumulate in it even quicker that has generated the positive gravitational anomaly opened by the probe New Horizons.

As a result of it, as well as in a case with an “asteroid” hypothesis of the birth of plains of the Satellite, the axis of rotation of Pluto has begun to be displaced, and future heart of Pluto has moved closer to his equator and has turned towards Charon, the largest satellite of the dwarf planet. Here, as Gemilton’s theory predicts, it has begun to evaporate gradually, traces of what as the planetologist claims, can be seen in pictures with New Horizons.