One of the most massive neutron stars is discovered 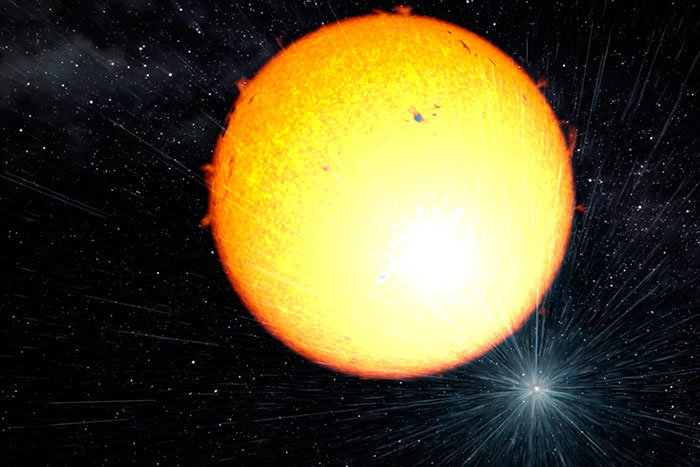 Astronomers have discovered a neutron star with a mass exceeding the mass of the sun by about 2.3 times, one of the most massive neutron stars known at the moment.

Neutron stars are celestial bodies that can be the result of the evolution of stars. They consist mostly of neutron core and, despite their small size (on average they reach about 20 kilometers in diameter), have a mass exceeding the mass of the Sun (thus, neutron stars have extremely high density). Usually, the masses of neutron stars (believed to be neutron stars are pulsars) amount to 1.3-1.5 solar masses.

This time, the Spanish astronomers, using the advanced method, were able to learn the mass of one of the heaviest neutron stars. The neutron star PSR J2215 + 5135, discovered in 2011, has a mass exceeding the mass of the sun by approximately 2.3 times, and is thus one of the most massive neutrons from over 2,000 such celestial bodies known at the moment.

PSR J2215 + 5135 is part of a binary system in which two gravitationally bound stars revolve around a common center of mass: an “ordinary” star (such as the Sun) and a neutron star. The first, as a rule, is subject to serious radiation from the latter.

The more massive the neutron star is, the faster “ordinary” moves in its orbit. The researchers used a new method that uses the spectral lines of hydrogen and magnesium to measure the velocity of the companion star. Specialists were able to establish the temperature in different hemispheres of the “ordinary” star – facing the neutron star and the reverse: the temperature at the first was 7,807 degrees Celsius, on the other – 5,487 ° C. Scientists also took into account that objects rotate around the center of mass in this system at a speed of 412 kilometers per second, and analyzed a number of other variables to ultimately determine the mass of the neutron star. So, its mass is about 2.27 times the mass of the Sun, and the mass of its companion is about 0.33 solar masses.

The researchers used the data of the Large Canary Telescope (GTC), Isaac Newton’s telescopes (ING), and the IAC-80 telescope (Teide Observatory). The work devoted to the study was published in the journal Astrophysical Journal, it was reported in a press release on Phys.org.