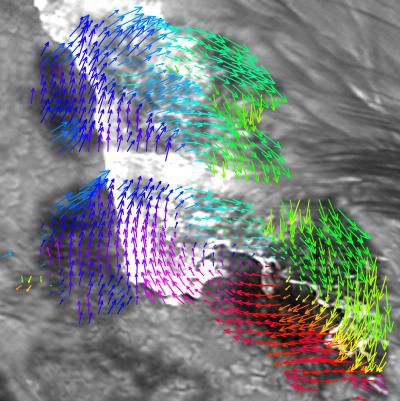 Physics-Dory for a long time considered the rotation of sunspots the main generator of solar flares – sudden, powerful emissions of electromagnetic radiation and charged particles into space in explosions occurring on the surface of the Sun. Their rotational motion leads to the accumulation of energy, which is then released in the form of outbreaks.

However, a group of physicists from the Institute of Technology of new Jersey (New Jersey Institute of Technology NJIT), USA today says that solar flares, in turn, exert a powerful influence on the solar spots, we observed thickening of magnetic fields on the solar surface, or photosphere. In his new work researchers argue that solar flares cause sun spots to rotate with much higher velocities (the velocity field of sunspots is shown in the photo) than usual, before their eruption into space.

These observations, based on the high resolution images taken with the 1.6-metre telescope, New Solar Telescope (NST), located in Observatory, Big Bear Solar Observatory (BBSO) NJIT, were a surprise to researchers. The outer shell of the Sun, or corona, which is the release of solar flares, has about 100 million times lower density plasma, in comparison with the photosphere.

“It’s about the same, what to see is the dog waving the tail, and the tail waving the dog (tail wagging the dog),” said Chang Liu (Chang Liu), Professor of physics at NJIT and principal author of the new study.

Still images taken with space solar missions at lower resolution, contained allusions to this phenomenon, however, did not allow him a clear confirmation, the researchers say.