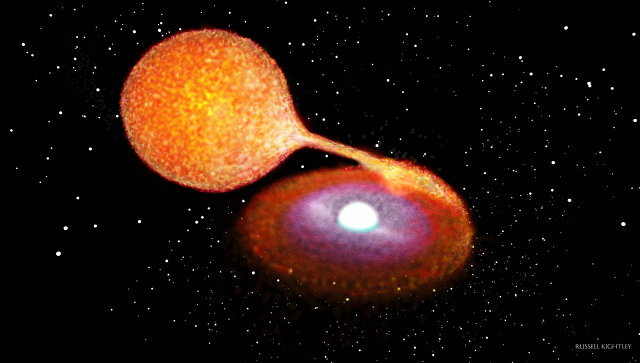 Astronomers have discovered an extremely unusual white dwarf in the constellation of the Little Dipper, which in the recent past has turned into a “Nobel” supernova, but in some mysterious way survived its explosion, according to an article published in the journal Science.

“Supernovae of the first type are used today as standardized space beacons, but we still do not know how they arise and what happens inside them during the explosion.” We opened a white dwarf that managed to survive this explosion, which proves that similar Flashes can occur with the participation of only one degenerate star, “write Stefan Vennes of the Institute of Astronomy of the Czech Academy of Sciences in the city of Ondřev and his colleagues.

So-called supernovae type Ia arise from white dwarfs – old “burnt out” stars of small mass, devoid of their own energy sources. They break out in double star systems, consisting of two white dwarfs or a white dwarf and a red giant. In the first case, the supernova explodes when the dwarfs merge, and in the second case, as a result of the accumulation of the giant’s matter on the surface of a smaller luminary.

Supernovae of the first type explode with approximately the same brightness due to the physical processes that control their development. This property Sol Perlmutter, Adam Riss and Brian Schmidt used to demonstrate the accelerating expansion of the universe, for which they received the Nobel Prize in physics in 2011.

Unlike other types of supernovae, as a result of this explosion, at least one star completely disappears, and in its place remains a hot and luminous cloud of red-hot plasma, the set of heavy elements that appeared during the explosion, which continues to shine for a few thousand more years, As it completely cools and fades. Because of such a high transience, the remains of such supernovae are very rare, and therefore they attract the eyes of astronomers.

Vennes and his colleagues found an extremely bizarre trail of one such “Nobel” supernova, watching the unusual star LP 40-365, moving with an unusually high speed in the sky. This speed, which is about 500 kilometers per second, should in principle be enough to overcome the gravitational pull of the Galaxy and leave it.

This star, at first glance, is an ordinary white light with a small mass, but its unusual spectrum, unlike anything else in the Galaxy, has forced astronomers to pay close attention to it and observe it for the last two years.

Such observations revealed many oddities in the structure and behavior of this star. The complete absence of neutral hydrogen and helium on its surface, a fairly low temperature and many other properties of LP 40-365 indicated that it is not a “normal” luminary, but a white dwarf with extremely unusual properties.

All this made scientists trace the trajectory of the flight LP 40-365 and try to understand what made it “catapult” and start flying at such a high speed. For this, the scientists calculated the mass of the white dwarf, which was about five times less than the solar one, and determined the distance to it – about 970 light years.

Using this data, Vennes and his colleagues found that the trajectory of the flight LP 40-365 passes away from the large globular clusters of stars and the center of the Galaxy, from which this star could be thrown black holes or other massive objects. This, in turn, means that this white dwarf is a “victim” of a supernova explosion, the cause of the birth of which he served himself.

As scientists believe, LP 40-365 about 50 million years ago was part of a dual system located on the other side of the Galaxy, a few thousand light years from the current position of this luminary. The white dwarf, who then possessed about 1.5 times more weight than today, gradually “stole” the matter of his companion and accumulated it on his surface.

When its mass reached a critical level, its upper layers exploded, and its hot core, consisting of neon, oxygen and other “heavy” elements, was ejected into space, as a result of which it began to move at a tremendous speed.