Opportunity handed over the first photos after the “wintering” 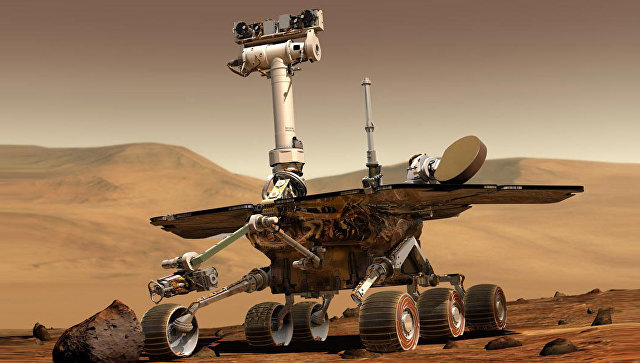 Opportunity Mars Veteran, who has been working on Mars since January 2004, successfully survived the eighth winter on the surface of the red planet and celebrated the event with a new portion of panoramic pictures of the edge of the Endeavor crater, NASA reports.

“We were worried that the rover’s solar panels could just as easily become covered with dust this year, as in the worst winter seasons on Mars.” It did not happen – on the contrary, the wind, as two years ago, blew away some of the dust and cleared the solar batteries. “If this happens in the future, Opportunity will be able to survive not only the winter, but also the next” big “dust storm that could happen in 2018,” said Jennifer Herman of NASA’s Jet Propulsion Laboratory in Pasadena (USA).

Mars rover Opportunity, working on the surface of Mars for 13 years, successfully survived the hardest months of the Martian “winter” – the coldest and darkest time of the year when the red planet is at the maximum distance from the Sun.

As Herman points out, the only source of heat and power on board Opportunity, unlike the Curiosity rover equipped with radioisotope generators, are its solar batteries, whose performance efficiency drops sharply when winter and autumn come for two reasons.

In addition to the growing distance between the Sun and Mars, the life of the rover is complicated by dust storms that begin at the end of the Martian autumn and last almost the whole winter. These storms cover the rover’s batteries with a lot of sand, which further reduces their efficiency.

NASA engineers found a witty way out of this dangerous situation by stopping the rover every winter and autumn and tilting its solar panels in such a way that they will simultaneously receive maximum light and sand will not accumulate on their surface. With enough steep hills, this allows Opportunity to continue to move around Mars and study its surface even during wintering.

Now Opportunity is located on the edge of the Endeavor crater, near the border of the Stoichosti Valley, where, as satellite images show, clays and other rocks formed in the presence of water lie. After the Martian winter is over, he will begin to move deeper into the valley, studying other traces of the movement of Martian rivers and streams.

Three years ago, Opportunity had already shown that water was actually present on the surface of Mars in liquid form in the past, thereby confirming the data obtained by the Curiosity rover in 2012.

At the moment, the veteran rover survives its 52 “life” – originally, NASA specialists planned that the rover will work only three months, but he has already been setting new records for a year already. Opportunity is now in excellent condition, and its performance, after the recent reformatting of memory, is at the peak of opportunities.