Our Galaxy is constantly increasing in size 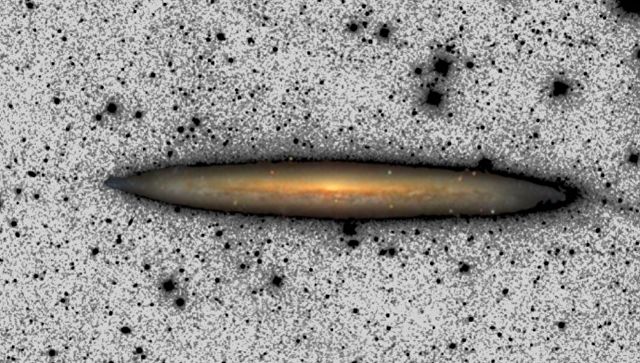 Observations of neighboring galaxies helped scientists find out that the boundaries of the Milky Way are gradually expanding due to the formation of new stars in its outskirts, adding 500 meters every second. This was stated by astronomers who spoke at the European week of astronomy and science in British Liverpool.

“The Milky Way was not the smallest galaxy yet, but now you’ve found out that its visible part is slowly but constantly growing as new stars form on the edge of its disk.When the Sun begins to die, the size of the Galaxy will increase by about 5 %, “Said Cristina Martines-Lombilla of the Canary Islands Astrophysical Institute in Tenerife, Spain.

Approximately half the galaxies surrounding the Milky Way in the foreseeable universe are “dead” from the point of view of cosmological evolution – they have long ceased to form new stars, and therefore they gradually “blush” and fade away. Why this happens, the scientists do not know yet, and there are many hypotheses on this score.

For example, the Russian-German astronomer Alexey Finogenov believes that galaxies die from “gluttony.” The number of “stellar building materials” in them in the past was so high that they launched an explosive reaction to the formation of new luminaries, quickly devastated the reserves of these neutral gases. Other scientists believe that black holes are to blame for the death of galaxies, which “suffocate” them from within, or even dark matter.

Martinez-Lombilla and her colleagues discovered another factor that can influence the evolution, life and death of “star metropolises”, watching several nearby galaxies and the nature of the motion of the stars in them.

As the astronomer explains, her team tried to reveal the features and main routes of “mass migrations” of stars arising on the outskirts of galaxies. When such luminaries are born, they often leave the limits of those stellar nurseries where they were born, and migrate toward the core and inner regions of galaxies.

Scientists have long wondered how this process affects the size of the Milky Way and the nature of its evolution. Opportunities to assess this they did not have because of the fact that we live inside our Galaxy. Martinez-Lombilla and her colleagues avoided this problem by observing the galaxies NGC 4565 and NGC 5907, similar in size and structure.

Watching the movement of young blue giants, scientists managed to prove that the boundaries of these galaxies do not stand still and gradually expand, and calculate the speed with which the Milky Way grows. According to their calculations, for the year the boundaries of the Galaxy should expand by 15 billion kilometers, which is roughly the tenth of the distance between the Earth and the Sun.

By the standards of space this is a fairly modest distance, but in a few billion years, changes in its size will be clearly visible to outside observers, including residents of NGC 4565 and NGC 5907, if there are extraterrestrial civilizations there. These changes in the size of the Milky Way, according to scientists, can greatly affect the nature of its further evolution.