Our tan on one desyatitsentovoy due to cosmic rays 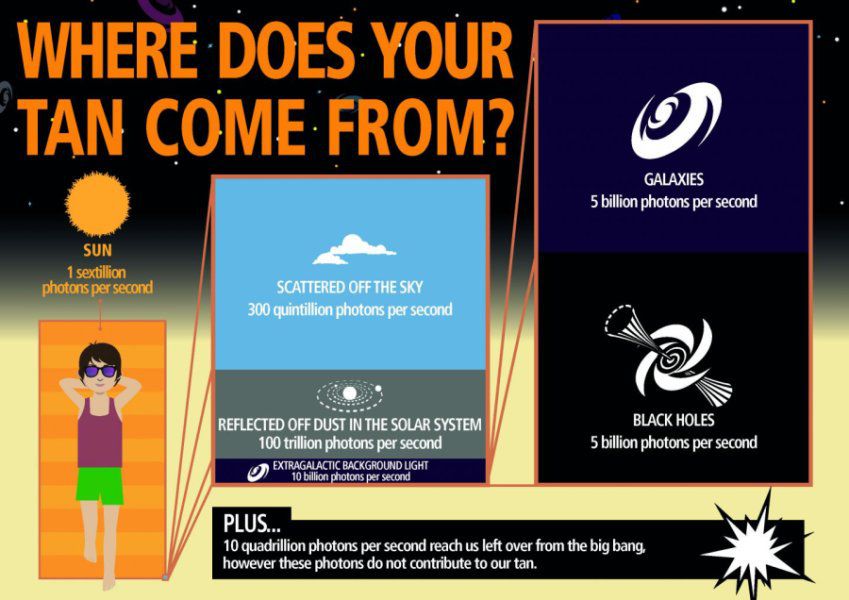 Lie on the beach under the sun’s rays and your body will undergo to bombardment, approximately one Zeta-flop (10^21 photons of light per second.

Most of these photons, or tiny portions of energy comes from the Sun, however, a very small fraction went through the Universe for billions of years before you complete your journey by contact with your skin.

In the new study, astronomers carefully measured the amount of light bombarding our planet, in a very wide range of frequencies. In this study we analyze the photons with a wavelength of from fractions of a micron (threat) to several millimeters (harmless). However, the radiation coming from outside the Galaxy, is only one desyatitsentovoy of the total number of radiation shaping your tan, so while it is not necessary to sound the alarm.

Professor of astrophysics Simon Driver from the International centre for radio astronomy research (International Centre for Radio Astronomy Research, ICRAR) and his colleagues in this work have measured the background radiation coming to us from the Universe, analyzing the results of observations made with a whole fleet of space telescopes: Galaxy Evolution Explorer satellites, Wide-field Infrared Survey Explorer space Observatory “Spitzer” and “Hubble” space Observatory “Herschel”, ESA, as well as the Australian sky survey Galaxy And Mass Assembly.

This study is part of ongoing centre ICRAR’s work on the study of the evolution of energy, mass and structure of the Universe.