Outbreaks on the Sun – why are they dangerous? 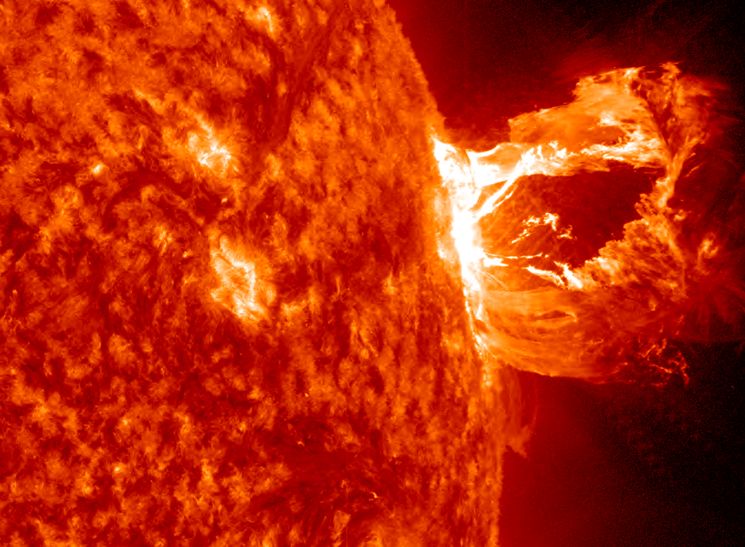 For more than a decade, scientists from different countries have been trying to figure out how to predict such natural phenomena as outbreaks on the Sun. Their frequency is determined by eleven-year cycles of solar activity. However, the most powerful and unpleasant manifestations of the activity of the Sun overtake us, quite suddenly, to this day. This is due to the fact that it is possible to predict solar flares only when analyzing magnetic solar fields that do not differ in constancy and at least in minimum stability.

The effect of solar flares on outer space

The most unfavorable solar flares are considered for space explorers. Presenting the greatest degree of threat in space expanses, waves of powerful explosive energy may well damage communications satellites, and even space vehicles, completely disabling devices and control systems. Flashes on the Sun, forming powerful fluxes of protons, significantly increase the level of radiation, so that people in outer space can easily undergo strong irradiation. A certain risk of exposure exists even for passengers of airliners who fly at certain periods, occurring at peaks of flare activity.

During the Soviet Union, leading experts in the Crimean Astrophysical Observatory attempted to predict the likelihood of solar flares, and if prerequisites for an energy explosion arose, flights of astronauts were necessarily postponed. A world sensation in 1968 was the forecast of Soviet scientists about the forthcoming solar flare, which was assigned the highest level of danger – three points. Then the Soyuz-3 spacecraft with George Beregov was planted, and after three hours they observed a powerful flash on the Sun, which would become deadly for a person in space.

Solar flares can pose a considerable danger for the inhabitants of our planet, even though the Earth is protected from them by the geomagnetic field and the atmospheric ozone layer. Each such flash is accompanied by a cloud of a kind of plasma and, reaching the Earth, it is this plasma that causes magnetic storms that negatively affect almost all living organisms and disable the most powerful communication systems.

After the start of the solar flare, the radiation reaches the surface of the Earth during the 8-10-minute period, after which energetically charged particles are directed toward our planet. Then within a three-day period the plasma clouds reach the Earth. A peculiar blast wave collides with our planet and causes magnetic storms. The duration of each outbreak is usually not more than a few minutes, but this time and the power of the energy release is quite enough to influence the state of the Earth and the well-being of its inhabitants.

Scientists outbreaks on the sun were classified into five types: A, B, C, M, X. At the same time A – flares with a minimum degree of X-ray radiation, and each subsequent – 10 times more intense than the previous one. The most powerful and dangerous are class X outbreaks. Numerous scientists and researchers have noticed that even typhoons, hurricanes and earthquakes most often occur during the manifestation of solar activity. Therefore, forecasts of various natural disasters are often associated with outbreaks on the Sun.

The main types of danger in solar flares

While not exaggerating the level of influence of flares from the sun on the human body and health, it is possible to identify groups of people who are most susceptible to the negative effects of solar energy explosions.

It has been proved more than once that catastrophes and accidents are caused by the human factor to grow quantitatively in the days of solar flares. This is due to the fact that in such periods the brain activity is weakened as much as possible, and the concentration of attention is greatly dulled. In addition, for a number of people magnetic storms are the causative agents of real anguish and disorders. There are many such groups:

People with weakened immunity;
The population suffering from cardiovascular diseases, migraines, irregular blood pressure drops;
People with chronic diseases that are aggravated during each outbreak of solar energy and a subsequent magnetic storm;
The population, subject to periodic manifestations of insomnia, loss of appetite, restless sleep;
Mentally unbalanced personality.

There are separate opinions, which have been repeatedly confirmed in practice, that many during old magnetic storms begin to worry old wounds, scars, damaged bones or diseased joints. Also in a separate group include those representatives who have a so-called delayed reaction to magnetic storms. These are people who experience negative consequences a few days after the solar flares.

Many experts advise periodically to undergo medical examinations to identify chronic diseases. Since this kind of illnesses are greatly aggravated during outbreaks on the Sun, it will be possible, if not to prevent the forthcoming malaise and deterioration of health, then at least have at hand effective medications.
As scientists try to predict outbreaks on the sun

Given the degree of influence and danger from solar flares, work and attempts to find the most reliable methods for predicting this phenomenon do not stop. For a long time scientists and weather forecasters considered two ways of solving the problem:

Casual – is based on the prediction of the nearest outbreak by the method of its modeling, for which the physical mechanisms of the outbreak are carefully studied.

Synoptic – a method in which is meant the study and analysis of the preconditions and behavior of the Sun before each outbreak.

It is undeniable that the coronal origin of solar flares and their magnetic nature are directly related. So, and for better development of forecasting, it will most likely be necessary to link both methods together.