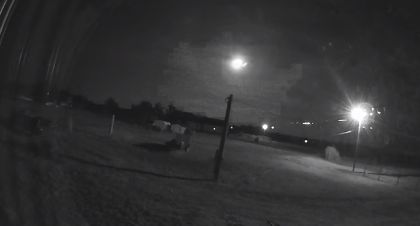 NASA released a video of an incredibly bright meteor that illuminated the sky over Alabama right after midnight local time on Friday.

The fireball, based on the description, was “at least 40 times brighter than the full moon.” According to NASA’s Meteorological Management at the George Marshall Space Flight Center in Huntsville, it was first seen at an altitude of 93 km off Turkitown, northeast of the city of Gadsden in Alabama.

According to NASA, the meteor flew to the northwest at a speed of 86.4 km / h and disintegrated at an altitude of 28.9 km above the small town of Grove Oak.

Most likely, the meteor was caused by a small asteroid with a diameter of 1.8 m. NASA noted that its appearance was the brightest event in the cloudy sky, which caused the activity of all cameras and sensors to track meteorites in the region.