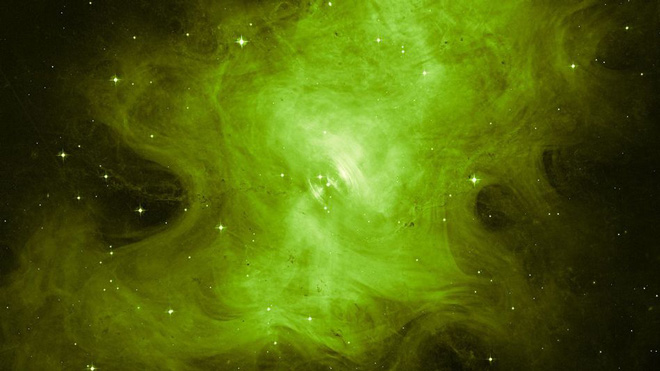 The dead star demonstrates its ghostly-green pallor in the photo of the Hubble Space Telescope.

The picture, published in time for Halloween, shows the remains of a star that exploded years ago as a supernova in the Crab Nebula, 6,500 light-years from Earth, leaving behind an eloquent “heart.”

“The“ heart ”is the destroyed core of an exploding star,” writes NASA. “The neutron star had almost the same mass as the Sun, but was squeezed into an ultra-dense ball with a diameter of only a few kilometers and 100 billion times stronger than steel. The tiny powerhouse is a bright star-like object near the center of the image. ”

The neutron star rotates 30 times per second, producing an extreme magnetic field, and throws out beams of waves that form an expanding ring.

If you want to see the strange object yourself, find the telescope and direct it to the part of the space where the Crab Nebula is located in the constellation Taurus.

NASA says that people on Earth have been watching the Crab Nebula since 1054. Then the Chinese astronomers saw the mysterious space object in the daytime.

“Japanese, Arabic observers and American Indians also noticed a mysterious star,” says NASA. – In 1758, while searching for a comet, the French astronomer Charles Messier discovered a smoky nebula near the location of a long-disappeared supernova. He later added the nebula to his star catalog, noting it as a “false committee”. ”

Only in 1928, Edwin Hubble connected the “false committee” with an object that Chinese astronomers have observed for centuries earlier.