Past the Earth passed the comet, falling apart 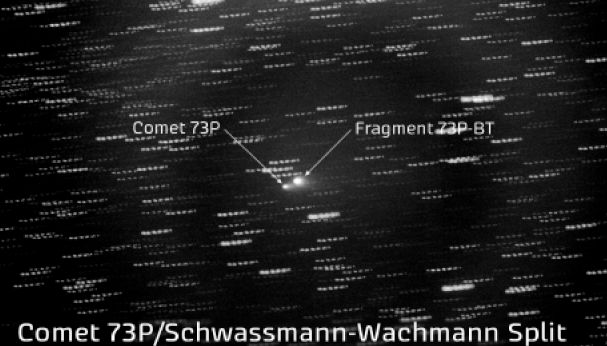 Astronomers from the web Slooh Observatory has photographed comet 73P when it flew past Earth and found that it started to fall apart. A heavenly body is unlikely to survive the next rendezvous with the Sun or Jupiter, the press service of the organization.

“In the coming months, the comet will be more likely to be at risk. In mid-March, it is closer to the Sun, and then begin the journey back to the Kingdom of Jupiter, one of the main “killers” of comets in the Solar system. Closer to the Sun this year and with Jupiter in 2025, if she survives the meeting with the guru, put – 73P action of powerful gravitational forces of stars and planets-giant. It seems that they have already started to split it in half,” said Paul Cox (Paul Cox) from the Slooh Observatory.

Comet 73P was discovered by German astronomers Arnold Swissmanim and Arno Womancom in 1930, and until the beginning of this Millennium, it attracted the attention of scientists. Comet dwells between the orbits of Earth and Jupiter, coming close to the Sun every five years and four months and visiting the vicinity of the Earth every 16 years.

In 2006, a celestial body attracted the attention of astronomers to the fact that the nucleus of the comet began to break down. First small pieces, as shown by the analysis of archival data, split from him in 1995, and by 2006, experts recorded eight fairly large fragments of the comet moving in parallel with it. Analysis of the comet showed that it could completely collapse in this century.

The process of the final destruction can be launched, said Cox. As shown by images taken by the astronomers of the Observatory Slooh over the weekend with the help of telescopes in Chile, the comet began to break up into two halves during the last convergence of the comet with the Earth.

When the comet gets closer to the Sun and its surface temperature will increase, melting of frozen gases and the attraction of the lights can break it into many pieces that scattered in space, or re-freeze on the way 73Р to Jupiter. If the comet will survive a meeting with the sun, it can collapse when approaching Jupiter, destroying many comets each year.

Scientists continue to follow the fate of 73Р. Comet Sussmann-Wachmann poses no threat to Land, and monitoring it can help scientists to better predict how long you live and how comets change their orbits in the interaction with the star and the planets-giants.