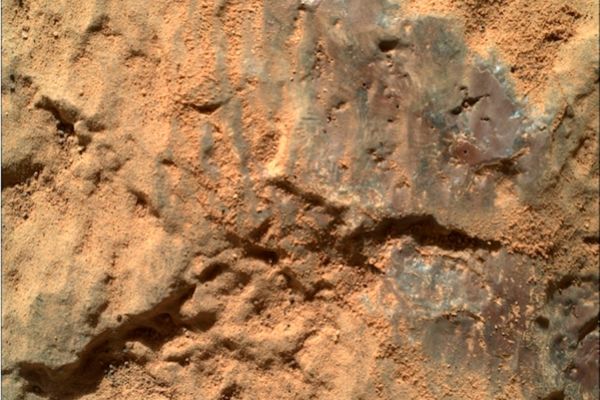 Scientists have analyzed purple spots on Martian rocks using Perseverance instruments. The research materials were presented at the conference of the American Geophysical Union.

For the first time, unusual spots on Martian rocks were discovered by the Viking spacecraft in the 1970s. Over time, experts realized that they were thin coatings.

Ann Ollila of the Los Alamos National Laboratory and her colleagues used several instruments from the Perseverance rover to study similar spots in the Lake Lake region. First, the Mastcam-Z camera allows the use of various filters that block specific wavelengths of light, allowing scientists to get a rough idea of ​​rock composition.

Secondly, the SuperCam has a powerful laser that vaporizes sections of the rock and provides more accurate spectroscopic data. Thirdly, Perseverance microphones pick up the click that occurs when the laser is “shot” and allow you to get data on the density of the rocks.

As a result, scientists found that the spots are composed of various iron oxides enriched in hydrogen and, sometimes, magnesium. The presence of hydrogen suggests that water played a role in the formation of spots. This is especially interesting given the fact that at the moment Perseverance is not among lake sediments, but on igneous rocks.

Such thin coatings are of particular interest to astrobiologists, since similar formations on Earth arise as a result of the vital activity of bacteria.