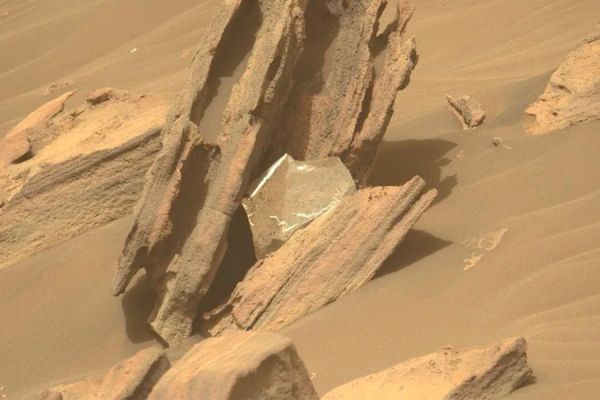 On June 13, 2022, NASA’s Perseverance rover took a photograph of a shiny, silvery object sandwiched between two rocks at the bottom of Lake Jezero Crater on Mars, where the rover has been exploring since landing in February 2021. However, this turned out not to be evidence of highly developed Martian life, but just part of the heat-shielding coating that once covered its own chassis, writes Space.com.

“Our team has discovered something unexpected: it is a piece of heat shield that we believe may have come off during the final stage of the vehicle’s descent in 2021, when the jet brake engines were activated,” members of the Perseverance team wrote on June 15 on the rover’s Twitter account. This shiny piece of foil is part of a thermal blanket used to control temperature. It is surprising that it was found so far from the landing site: the landing stage is about 2 km from here. It remains a mystery whether this piece was here immediately after the fall or was carried from afar by the wind.

This isn’t the first time Perseverance has studied the gear on Mars that helped it land safely. Previously, he took pictures of his parachute, and on April 19, a tiny NASA Ingenuity helicopter flew over the wreckage of the landing equipment and the rover’s parachute, taking spectacular photos from different angles. NASA officials say the aerial photographs help engineers assess the state of materials that have landed on Mars, which will help them design future Martian missions.