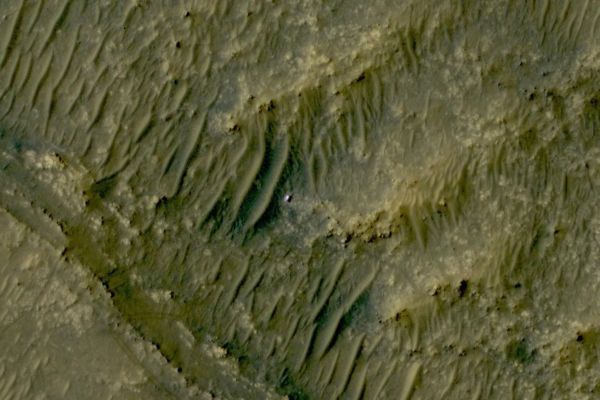 Using the Mars Reconnaissance Orbiter (MRO), NASA specialists obtained a satellite image of the Perseverance rover, which continues its research in the area of ​​the Jezero crater, on the border of the Big Syrt and the Isis plain. This is reported by ScienceAlert.

From a height of hundreds of kilometers, the rover is visible as a small silvery speck in the very center of the image. The MRO has been in orbit since 2006, its mission is primarily to study the atmosphere and large-scale geology of Mars, but it is also used to support NASA’s own planetary exploration vehicles Curiosity and Perseverance, as well as a stationary landing Marsquake tracking InSight.

Perseverance was launched to Mars on July 30, 2020, landing on the planet took place on February 18, 2021, currently the all-terrain vehicle has already traveled several kilometers, accompanied by the Ingenuity drone. Perseverance’s mission is to collect data on the climate and geology of Mars, as well as to look for signs of life, such as fossils or microorganisms, that have survived since there was still enough water on Mars. You can track his path around the planet using the NASA website.

The landscape through which Perseverance travels consists of a series of ridges covered with sand dunes and strewn with boulders and rock fragments. The rover just the day before produced another soil sample, which will be delivered to Earth by a future mission; this sample was taken from a relatively young region of Mars. It is believed that the region of Bolshoy Syrt was formed in earlier times, therefore, its study and comparison with more recent geological formations will be of particular interest. At present, Mars is in the opposite point of its orbit from the Earth and communication with it is blocked by the Sun, therefore the active work of all Martian vehicles is paused until mid-October.