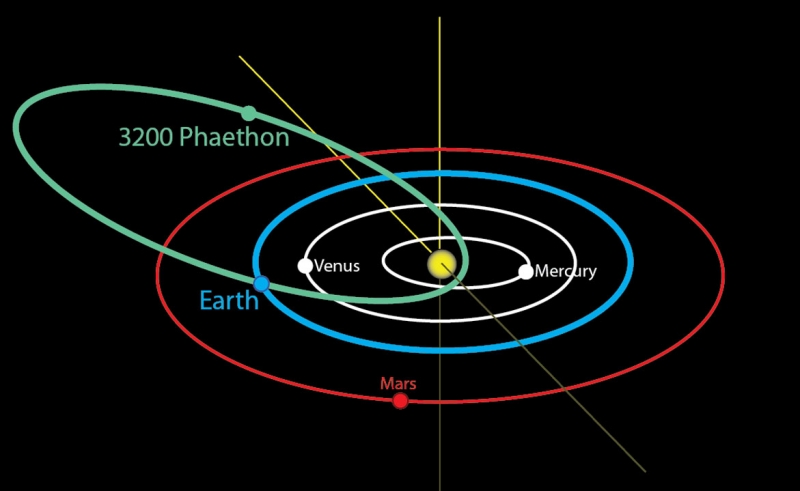 Opened in 1983 near-earth asteroid Phaethon intrigues researchers due to its unusual orbit. The team of astronomers not so long ago studied the trajectory of the space rock moves around the Sun. The researchers were also able to Refine the period of rotation and thermal properties of the asteroid.

The chaise belongs to the group Apollo. Moving along an orbit, the asteroid is approaching the Sun at a record for objects of class distance — all of 0.14 astronomical units (about 21 million kilometers). Scientists believe the Phaeton main body, meteor shower Geminids, which can be observed from Earth in mid-December.

Phaethon orbits, which is characteristic of the comet, not asteroid. The ellipse, on which he flies the Sun, greatly elongated (eccentricity 0.9) and crosses the orbits of four terrestrial planets. Such features orbit impel scientists to think that the Phaeton is a silicate nucleus of a comet, which, flying around the Sun, lost its ice shell.

To determine the exact shape of the asteroid needed his pictures taken from different angles. To receive such images usually takes decades. Josef Hanus (Josef Hanuš) and his team analyzed 55 of the light curves of the Phaeton, built in the period from 1994 to 2015. The scientists also independently received 29 new curves using telescopes around the world.

“The data from each observation are equally important, and all of them contributed to the determination of the shape of the object. We used 9 different telescopes. The largest of these was a 2.2 metre University of Hawaii telescope, located on Mauna Kea,” — said Hanus.

Using light curves, scientists have been able to get an idea about the shape of the asteroid. In addition, the group Hanus failed to determine its period of rotation (3.6 hours) and the exact dimensions of 5.1 kilometer. These results are in good agreement with previous studies.

The interest of the scientific community to the Phaeton, there is now growing, because in 2017 it is expected closest approach of an asteroid with the Earth. In December of next year it will be just 10 million miles from us. Scientists plan to use several methods for a detailed study of the chaise with minimum distance.

“In the planning of future research will be used our results,” said Hanus.

In the near future, scientists hope to learn the composition of the Phaeton and to better understand the relationship of the asteroid meteor shower, the Geminids.