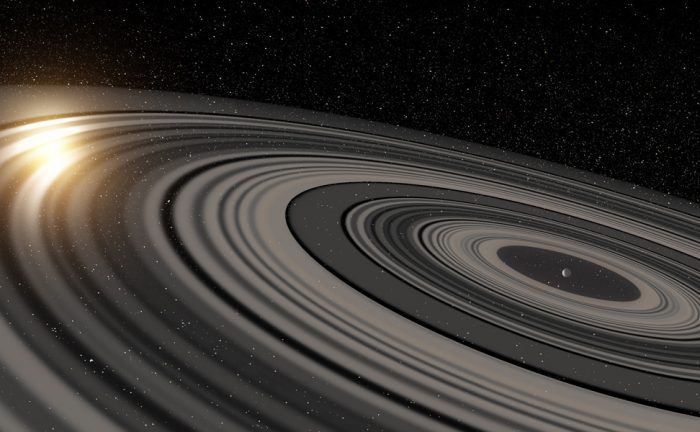 In 2007, astronomers observed a series of unusual eclipses of stars located at a distance of 420 light years from Earth. In 2012 a team of researchers from Japan and the Netherlands suggested that this phenomenon may be associated with the presence of large extrasolar planets – designated J1407b, with a massive ring system orbiting a star. Since then, further study of this system allowed us to make some amazing discoveries.

For example, in 2015, the same team of astronomers came to the conclusion that this ring system is approximately 100 times more extensive and massive compared to the ring system of Saturn. And finally, in his latest research, these authors show that the system, including the planet with those giant rings can stably exist for 110,000 years in that case, assuming that the rings are moving around the planet in a very unusual manner.

In their new study, Steven Rieder from the Institute of physical and chemical research RIKEN, Japan, and Matthew Kenworth of Leiden University, the Netherlands, has conducted several simulations using software called Astrophysical Multi-purpose Software Environment (AMUSE). The simulation results showed that the ring system around this exoplanet with an orbital period of 11 years and retrograde orbits can survive for a period of not less than 10,000 orbits.

To explain the origin of the ring system with a retrograde, that is opposite to the direction of the orbital motion of the planet around the star and direction of their own rotation, which is a very rare phenomenon, the authors suggest a scenario that includes a powerful cosmic collision, which forced the ring to rotate in the opposite direction.