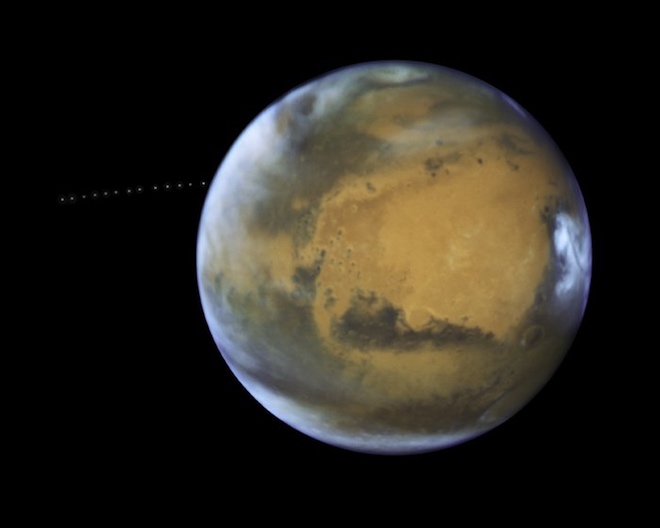 The NASA / ESA Space Telescope Hubble received this image of Phobos while it was traveling in orbit around Mars on May 12, 2016. The purpose of the observations was Mars, which at that time was at the closest distance from the Earth, and the appearance of his companion was a successful addition.

For 22 minutes, Hubble held 13 separate positions, which allowed astronomers to create a video showing the movement of Phobos around its planet. Since the size of the satellite is only 27 × 22 × 18 km, in the image it looks tiny, like a distant star.

Phobos is located at the closest distance from its planet, than any other satellite in the solar system. It moves around Mars at a distance of 6000 km, and his brother Deimos much further – about 23,500 km.

Although the origin of satellites is fraught with many questions, their fate is inevitable. Phobos is gradually approaching Mars and within 50 million years either it disintegrates due to the gravitational pull of the planet, or collapses on its surface. Meanwhile, for Deimos, the opposite is true: its orbit is slowly receding from Mars.